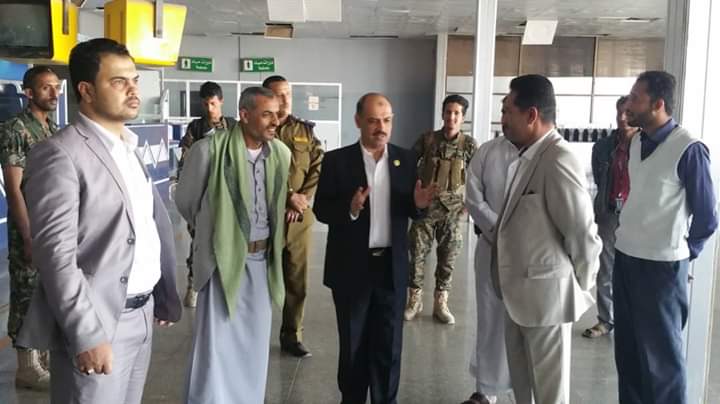 Minister of Transport Zakaria Al-Shami confirmed the readiness of the Sanaa International Airport for technical and professional purposes in accordance with international requirements and the International Civil Aviation Organization (ICAO) to receive civil flights.
Shami said during a visit to Sana'a International Airport that the airport is ready to receive all civilian aircraft,
in addition to receiving daily United Nations aircraft and international organizations and relief.
He pointed out that the General Authority for Civil Aviation and Meteorology was quick to find alternatives to communication and communication devices and technical equipment required by the airport after the aggression targeted the infrastructure of Sanaa International Airport and vital installations of buildings and technical equipment and others.
He said that "the aggression deliberately direct the Sanaa international airport for readiness to target systematic and repeated" .. He explained that the first raid of the air force was at Sanaa International Airport.
He noted the extent of staff discipline and keenness on the readiness of Sanaa airport with all its facilities.
During his visit, Al-Shami briefed the Director-General of Sana'a International Airport Khaled Al-Shayef on the efforts exerted to rehabilitate the airport after each raid by the Air Force, as well as the direct and indirect damages and losses caused by the targeting of the airport's facilities, buildings and equipment. Ready.
He was briefed on the damage caused to the new arrivals, arrivals and expansion services by repeated raids and the main landing strip, which had been rehabilitated more than once.
He also briefed the Minister of Transport on the amount of efforts made to re-prepare the lighting of the aviation field and the damage suffered by the field and stations.
Shami inspected the new Sanaa International Airport and the amount of damage and losses sustained by the attack by the Air Force.