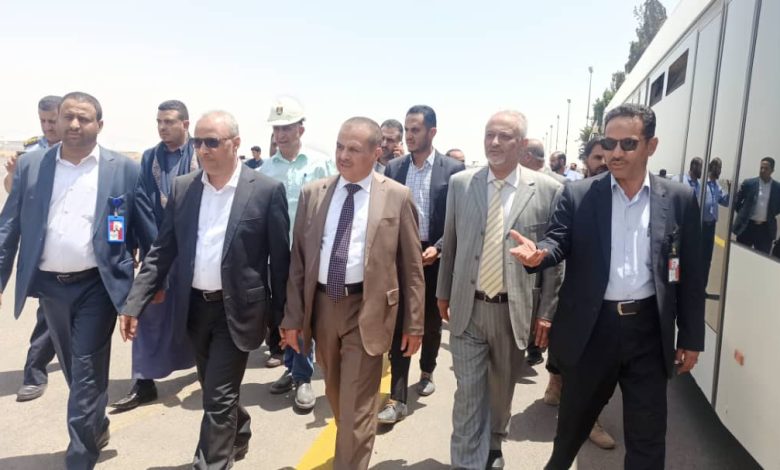 Al-Wahbani, Al-Junaid and Al-Durra were briefed on the level of arrangements and equipment at Sanaa Airport and the services provided to travelers, which contribute to facilitating travel procedures.

And they heard from the Director of Sana’a International Airport, Khaled Al-Shayef, an explanation of the progress of the technical and professional work and the air and land navigation services provided by the airport in accordance with the requirements in force at international airports and the Civil Aviation Organization “ICAO” .. referring to the difficulties facing the airport, and the targeting of it Systematic by aggression.

The Supreme Political Member, Deputy Prime Minister and Minister of Transport was briefed on the arrival, departure and reception halls, including the technical equipment and travel procedures provided to travelers in accordance with international conditions and requirements.

He listened from specialists to the needs that would provide the best services in the field of civil aviation, given that Sana’a International Airport is the first gateway to Yemen.

During the visit, Al-Wahbani praised the efforts made to maintain the airport’s technical and professional readiness, and to operate civilian commercial flights that were included in the humanitarian truce.

He affirmed the Supreme Political Council’s interest in Sana’a Airport and providing support to contribute to the strengthening and development of the airport’s work.. He called on the United Nations to put pressure on the coalition of aggression to commit to conducting all civil commercial flights, especially to the Arab Republic of Egypt, in accordance with the armistice, which contributes to alleviating the suffering of citizens in general and patients in particular. .

In turn, the Deputy Prime Minister for National Vision Affairs indicated that Sanaa Airport has maintained its readiness since the beginning of the aggression until now.

He pointed out that the aggression sought to paralyze the movement of Sanaa Airport by closing it to all commercial, civil, humanitarian and relief flights, but thanks to the qualified technical and professional expertise in the field of civil aviation, the plans of the aggression were thwarted and the airport proved its readiness with evidence of the conduct of civilian commercial flights included in the armistice and international flights .

Meanwhile, the Minister of Transport stressed that Sana’a International Airport has technical and professional expertise that has greatly contributed to enhancing its readiness to receive all commercial and civil flights with efficiency and competence.

He pointed to the need to open Sanaa International Airport permanently and unconditionally, in a way that contributes to alleviating the suffering of the Yemeni people and the sick in particular.

He considered the failure to implement commercial and civilian flights in the required manner, according to what was stated in the humanitarian truce, and the aggression’s disavowal of carrying out flights on a regular basis, as evidence of its lack of commitment to the truce announced by the United Nations.

The Minister of Transport called for the speedy operation of flights from Sanaa to Cairo and back, at a rate of five flights per week, given the growing need for transporting registered passengers at this destination.

He was surprised by the postponement of the Cairo trip, despite the Egyptian authorities’ statements approving the operation of flights from Cairo to Sanaa and back.

Al-Durra called for scheduling and scheduling commercial flights for the coming period until the end of this year, to Cairo and Amman.

He added, “The executed flights proved the accuracy of the legal and security procedures, with the testimony and information of the UN bodies and the countries receiving flights from Sana’a International Airport.”