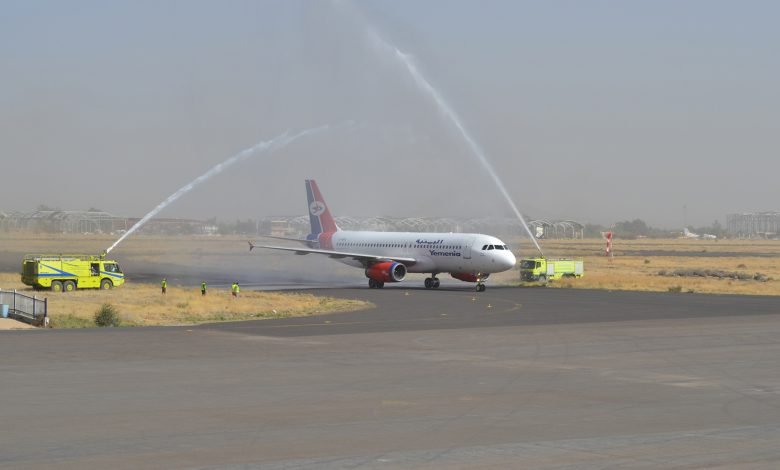 For the first time in six years, the Yemenia Airways plane took off on 18th May 2022 from Sanaa International Airport, as the first civilian commercial flight since the beginning of the humanitarian truce that entered into force on the second of last April and for a period of two months, with the possibility of extending it.

Yemen Airways had indicated that it had obtained the special permit to operate the first commercial flight from Sanaa International Airport to the Jordanian capital, Amman, in light of Yemeni and international demands, for the United Nations to abide by the terms of the armistice and to operate the 16 agreed-upon flights during the remainder of the armistice to alleviate the suffering of Yemenis.

There are no longer any excuses because Sanaa Airport is in a highly readiness in terms of operational, technical and professional operations, especially since the airport is providing navigational services to the United Nations, International and Humanitarian Organizations aircraft operating in Yemen on a daily basis with qualified Yemeni cadres.

The  aggression coalition procrastinated a lot in opening Sana’a International Airport with flimsy justifications and arguments, which had left catastrophic consequences and great human suffering for hundreds of thousands of Yemeni patients, whose the air blockade prevented them from traveling abroad for treatment, which also led to the death of many of them.

In the meantime, the International Community has stood watching the air, land and sea blockade imposed by the aggression coalition on the country, which has caused severe suffering to millions of Yemenis at various medical, commercial, educational and other levels as a result of an unprecedented act of aggression in the world.

The inauguration of the first flight from Sanaa International Airport came as a glimmer of hope for the continuation of the flights to alleviate the suffering of the citizens and as a relief to the long-term suffering.