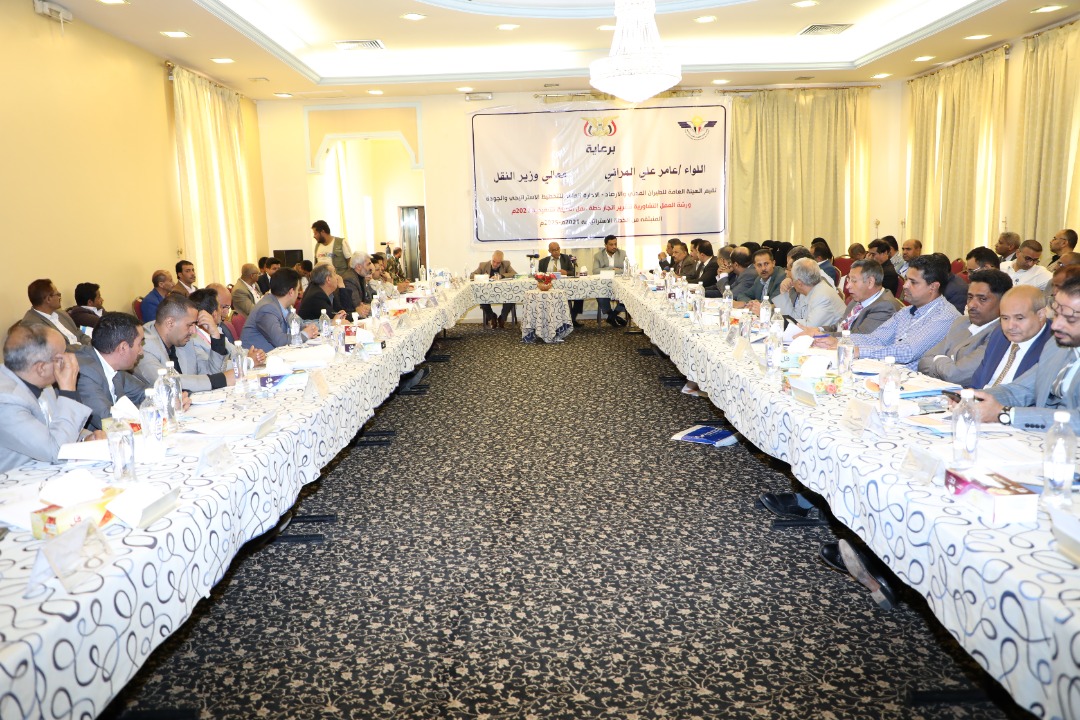 The workshop, in the presence of the Chairman of CAMA- Dr. Mohammed Abdulkader, CAMA's Deputy Chairman- Raed Jabal, the Assistant Chairman Deputies of the various sectors of CAMA and the directors general of the Authority and its sectors, aimed to develop the technical infrastructure and airports' readiness, enhancing the accuracy of the air navigation and meteorological services, boosting the aviation safety and control in accordance with the standards of the International Civil Aviation Organization, and improve the work environment of CAMA and the its various sectors.

The workshop also focused on the achievements carried out by CAMA, the difficulties that are facing the executive work plan for the past year, and the discussion and evaluation of the authority's strategic plan 2021-2025 in line with the national vision to develop and modernize the work of CAMA.

The Chairman of CAMA also stressed the keenness to evaluate the performance of CAMA and its sectors and the successes achieved during the past year to develop and modernize the field of civil aviation. He pointed out to the importance of the workshop to face the difficulties resulting from the current situation, indicating that the executive plan aims to modernize and develop the work of CAMA in accordance with the international requirements and conditions that emerged from the International Civil Aviation Organization (ICAO) and the World Meteorological Organization.

Abdulkader also explained that CAMA is working to develop and enhance the Aviation Safety in Yemen, the accuracy of the air navigation and meteorological services, keeping pace with the standards of the International Civil Aviation Organization (ICAO), and improving the infrastructure and readiness of international airports.

In turn, the Director General of Strategic Planning and Quality at CAMA- Hashem Yahya Abdulkader, and the Director of the Strategic Planning Department-  Mohammed Al-Nihmi, reviewed the general performance of the work plan implementation in the sectors and general departments of CAMA, and the difficulties and the work to tackle them, in a way that contributes to the development of CAMA's work locally and internationally wise.

The workshop came out with a number of recommendations aimed at developing  CAMA and its different sectors and solving the difficulties that faced the executive work plan of CAMA and its sectors in accordance with the international standards and requirements in the field of civil aviation and meteorology.