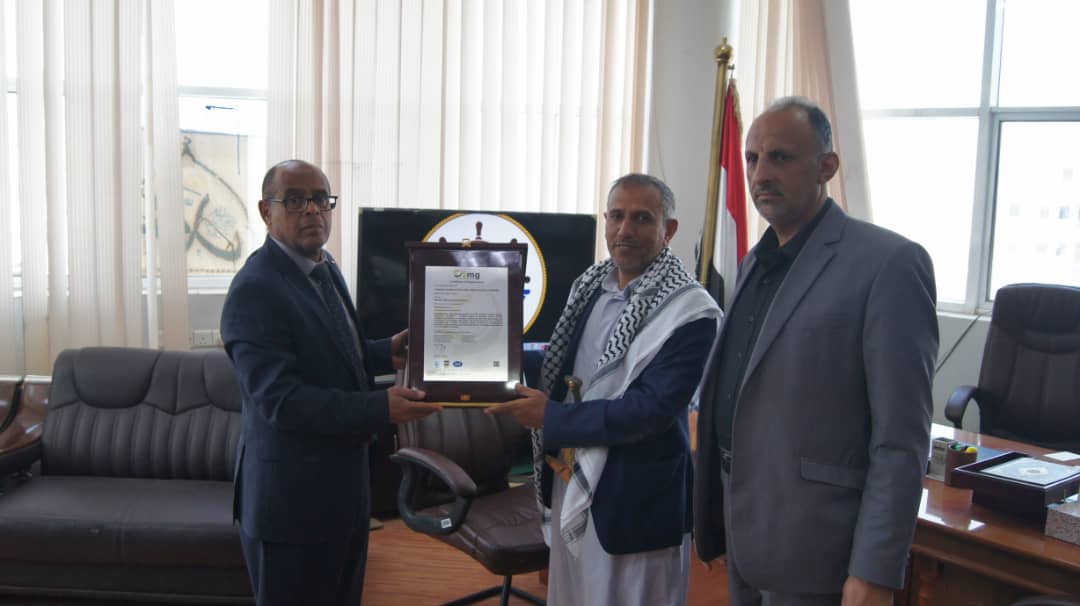 The Minister of Transport- Amer Al-Marani received on 21st February 2022 the International Quality Certificate ISO 9001:2015 as a result of applying the Quality Management System after auditing it by the "Sustainable Management Group - SMG - Canada".

The ISO International Quality Certificate, which was handed over by the Chairman of CAMA- Dr. Mohammed Abdulkader, and the Director General of Planning and Quality in CAMA- Hashem Abdulkader, stated that the Aviation Security and Safety Sector at CAMA obtained the establishment and implementation of a quality management system in accordance with the requirements of ISO 9001:2015.

In the meantime, the Minister of Transport praised the efforts of the leadership of CAMA and its professional, technical and administrative staff. He also considered that Yemen's obtaining the ISO certificate from the Canadian Sustainable Management Group - SMG - is an international recognition of the extent of the civil aviation authority's commitment and application of the international conditions and requirements in the field of civil aviation.

Meanwhile, the Chairman of CAMA stressed that the authority seeks to enhance, develop and improve the technical and professional capabilities in the various fields of civil aviation through intensifying the process of training and qualification of the authority's cadres to keep pace with international developments.

He also pointed to the importance of the international quality certificate ISO 9001:2015 for CAMA, as it was awarded by a neutral organization such as the ISO organization, which enjoys an internationally recognized reputation for following the highest standards in evaluating the quality of services and goods.