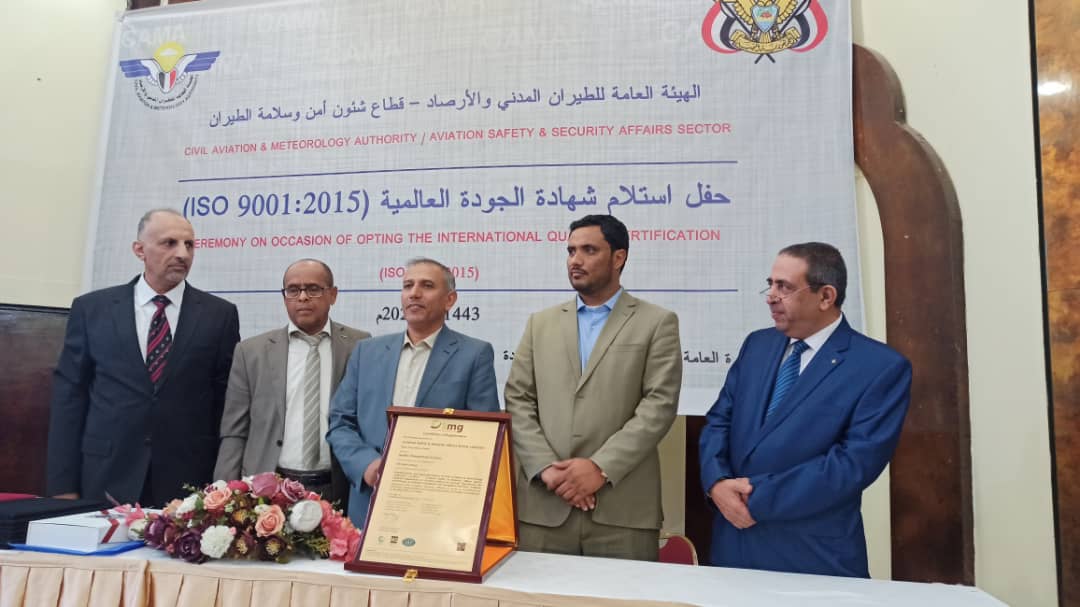 During the ceremony, which was held on the occasion in the presence of the Chairman of the Transport and Communications Committee of the House of Representatives- Ismail Al-Samawi, Minister of Transport- Amer Al-Marani considered Yemen’s obtaining the ISO certificate a great achievement in the field of civil aviation despite the conditions of the aggression and the siege.. Congratulations to the leadership of CAMA and its employees for this historic achievement.

He also stressed that Yemen's receipt of the international quality certificate with merit and high professionalism proves to the world its ability and determination to develop and keep pace in all fields according to the international requirements and stipulations. Minister Al Marani urged CAMA's leadership and employees to redouble the efforts to advance work in the various fields of civil aviation, which play a pivotal role in moving the wheel of the national economy.

In turn, the Chairman of CAMA- Dr. Mohammed Abdulkader indicated that the authority has set among its main objectives to obtain the certificate from a neutral entity such as the ISO, which enjoys an international reputation for following the highest standards in evaluating the quality of services and goods.

"Obtaining the international ISO certificate is a great gain for the Republic of Yemen in the face of the aggression that falsely the claims of the lack of technical and operational readiness in the field of air navigation and civil aviation," he said.

He also stated that CAMA seeks to achieve many professional and technical achievements in a way that contributes to improving its air navigation services in accordance with the international and ICAO conditions and requirements, stressing that obtaining this certificate is an international recognition of the efficiency of performance and the quality of services provided by the authority in the field of civil aviation and International Air Navigation.

The Chairman of CAMA praised the efforts of the technical cadres in the Authority’s  Headquarter and the Aviation Safety and Security Sector, in achieving technical and professional gains in the field of civil aviation.

On his part, the Assistant Deputy Chairman of the Civil Aviation Safety and Security Sector- Dr. Abdul Hamid Abu Talib, indicated that CAMA, represented by the Aviation Safety and Security Sector, has an effective quality management system that complies with international standards “ISO” that helps monitoring the planning, delivery and implementation of services and determine the performance indicators. and required quality standards.

Meanwhile, Mohammed Fawaz from the Canadian Donor Authority, in his online speech, congratulated Yemen on obtaining the international quality certificate by applying the quality management system QMS. The quality system in any institution was considered a positive and advanced step for the sustainability and development of business and the improvement of service delivery routes.

In turn, the Quality Systems Consultant- Khaled Morait reviewed the stages and executive steps for obtaining the international ISO certificate in quality management, which passed through multiple paths, stages, and technical and professional steps in accordance with international laws and standards by Sustainable Management Group - Canada.

On his part, the Director of Commercial Operations at Yemenia- Ali Al-Shami, stressed that the international quality certificate is a gain for Yemen in general and the Aviation Authority in particular.

The ceremony, which was attended by the Deputy Minister of the Ministry of Transport for Air Transport Sector- Abdullah Al-Ansi, the Acting Chairman of Yemeni Air Ways- Abdulmalik Mutahar, the Deputy Chairman of CAMA- Raed Jabal and the assistant Deputy Chairmen, included a presentation of the phases and working conditions during the period of completion of the quality management application program until the external audit, as well as granting the quality auditors badges of  the Internal quality audit, and distribution of certificates of excellence and shields to everyone who contributed to obtaining the ISO certificate.