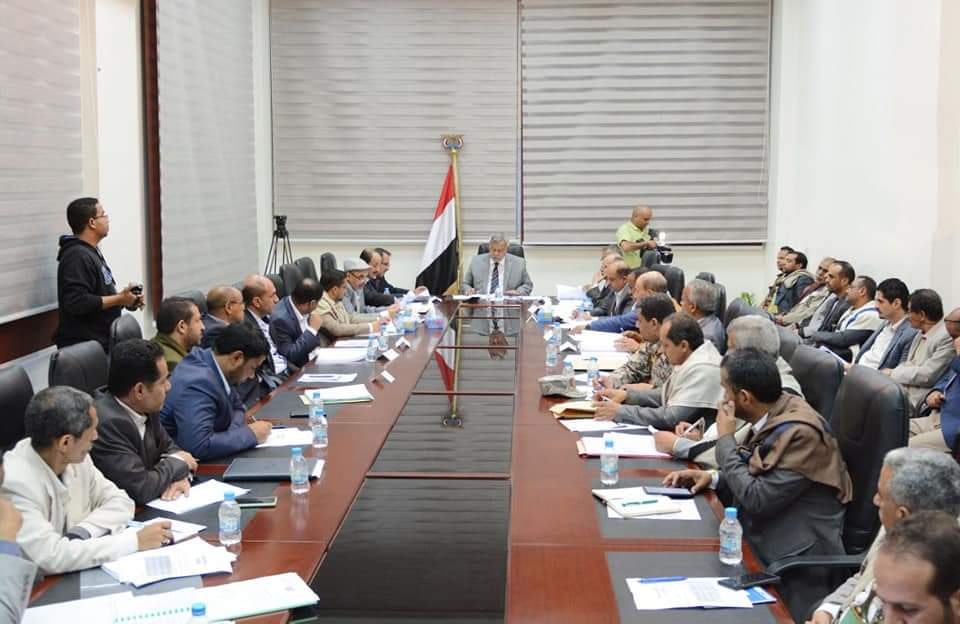 The Government in Sana'a, headed by the Prime Minister- Dr. Abdulaziz Saleh bin Habtoor, discussed the problems facing the new Sana'a Airport and the encroachments to its parameter and part of its lands.

In the meeting, which included the Deputy Prime Minister for Security and Defense Affairs- Lieutenant-General/ Jalal Al-Rowaishan, Ministers of Public Works- Ghaleb Mutlaq and Transport- Amer Al-Marani, Assistant Minister of Defense for Human Resources- Major General/ Ali Al-Kohlani, Head of the Land, Survey and Urban Planning Authority Dr. Hashem Al-Shami and Deputy Minister of Justice- Ismail Al-Wazir, the meeting was held on the nature of the joint responsibilities and competencies of the Ministry of Transport and other government authorities in implementing the project, based on the decision of the Council of Ministers regarding determining the airport's parameter, in addition to field information on the current situation.

The meeting, in the presence of the Chairman of CAMA- Dr. Mohammed Abdulkader, and the Deputy Chairman of CAMA- Raed Jabal, and a number of officials in the Ministry of Transport and CAMA, touched on the volume of the problem and its impact on the execution of the strategic project for the Republic of Yemen.

Meanwhile, the Minister of Transport reviewed the latest developments, the current and the critical situation in which the lands within the airport's parameter have become, pointing out that the failure to address the encroachments that affected the lands of the airport's parameter may negatively affect the execution of the project, as well as the international requirements of the International Civil Aviation Organization (ICAO).

He also stressed the need for the concerned and relevant authorities to pay special attention to this aspect and to work collectively to address the problems and avoid their aggravation to a level that is difficult to address.

The Prime Minister stressed the need to combine all concerned and relevant government efforts, based on the national responsibility of everyone to preserve the airport's parameter and prevent any encroachments on it, in order to ensure the completion of the execution of this vital and civilized service project.

The Minister of Transport directed that an integrated project shall be submitted to the Council of Ministers with a mechanism for dealing with the different aspects of the problem, with defining the roles assigned to the various concerned and relevant authorities, to discuss them at its next meeting, and to take the necessary decision and measures to address the various challenges faced by the airport, in addition to  specifying the time period for execution and ensuring its protection from the different illegal attacks that have affected it and threaten to stop the entire project.

Dr. Bin Habtoor also pointed out that the strategic importance of the new airport makes it imperative for the concerned and related parties to work in the spirit of one team to tackle the problem and decisively counteract the irresponsible actions of some weak-minded people and give priority to their narrow interests over the general interest of the Yemeni people.