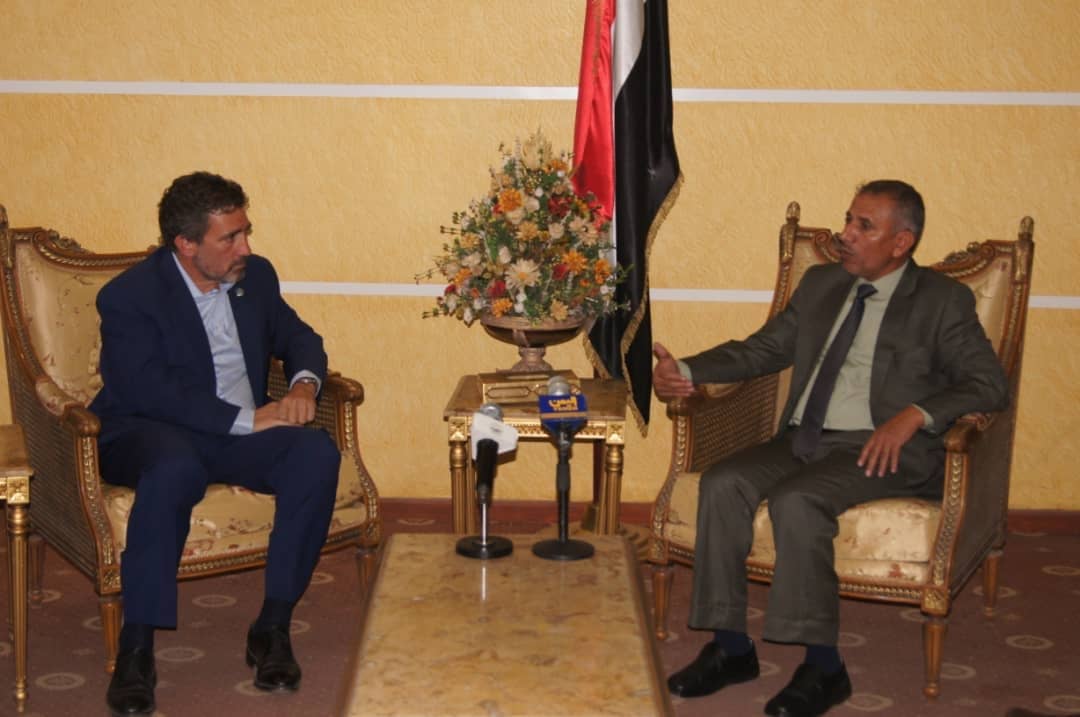 The Minister of Transport- Amer Al-Marani discussed today on 25th of December  2021 with the Vice President of the United Nations for Humanitarian Affairs in Yemen - Diego Zorrilla, the effects of the destruction that took place in Sana'a International Airport by the aggression's fighters, which led to its being out of service.

The meeting, which was attended by the Deputy Minister of Transport for Air Transport Sector- Abdullah Al-Ansi, the Chairman of CAMA-  Dr. Mohammed Abdulkader, the Deputy Chairman of CAMA- Raed Jabal and the Director of Sana’a International Airport- Khaled Al-Shayef, touched on the reasons for the technical systems and equipment that were targeted by the US-Saudi aggression. The meeting also stressed the importance of allowing the air navigational technical systems and equipment of CAMA that are located in Djibouti, which were purchased under the knowledge of the United Nations, to enter Sanaa airport.

In the meeting, the Minister of Transport confirmed that Sanaa International Airport is not closed in front of the United Nations flights, but rather stopped receiving the aircraft as a result of technical malfunctions in the tele-communications and air navigational equipment, which ensure the safety and security of civil aviation.

He also pointed out that the direct targeting by the aggression's fighters led by the US of Sana'a zInternational Airport and some places related to the humanitarian and civilian side - although there are no military manifestations - exacerbated the situation at the airport and further complicated the matter.

He explained that the technical systems and air navigational equipment, which were broken down at the airport, had been purchased as a replacement earlier with the knowledge and notification of the United Nations, and are currently in Djibouti, whereas the countries of the aggression coalition did not allow them to enter Sanaa.

Meanwhile, the Minister of Transport reiterated the denial of any military manifestations at Sanaa International Airport.. He said: "Sana'a Airport is a civilian airport that is subject to the international conditions and requirements applied in all international airports, the International Civil Aviation Organization (ICAO), and with the testimony of the United Nations Humanitarian Coordinator in Yemen- David Grassley, who visited the airport last November.

He called on the United Nations to pressure the countries of the aggression's coalition to allow the entry of air navigational equipment and systems that have been in Djibouti for more than one year, due to their importance in the continuation of the airport's work, and the provision of its air navigational services to the fullest, to ensure the safety and security of civil aviation.

He also stressed that Sana'a International Airport does not have any military manifestations, which he noted during his visit - last week - after it was targeted and  saw the destruction inflicted on the building of the Civil Aviation & Meteorology Institute, the branch of the oil company and its facilities, the health quarantine center, and the Yemen Airways hangar.

"We will work to find solutions to bring the required technical equipment and systems, which are in Djibouti," Zo