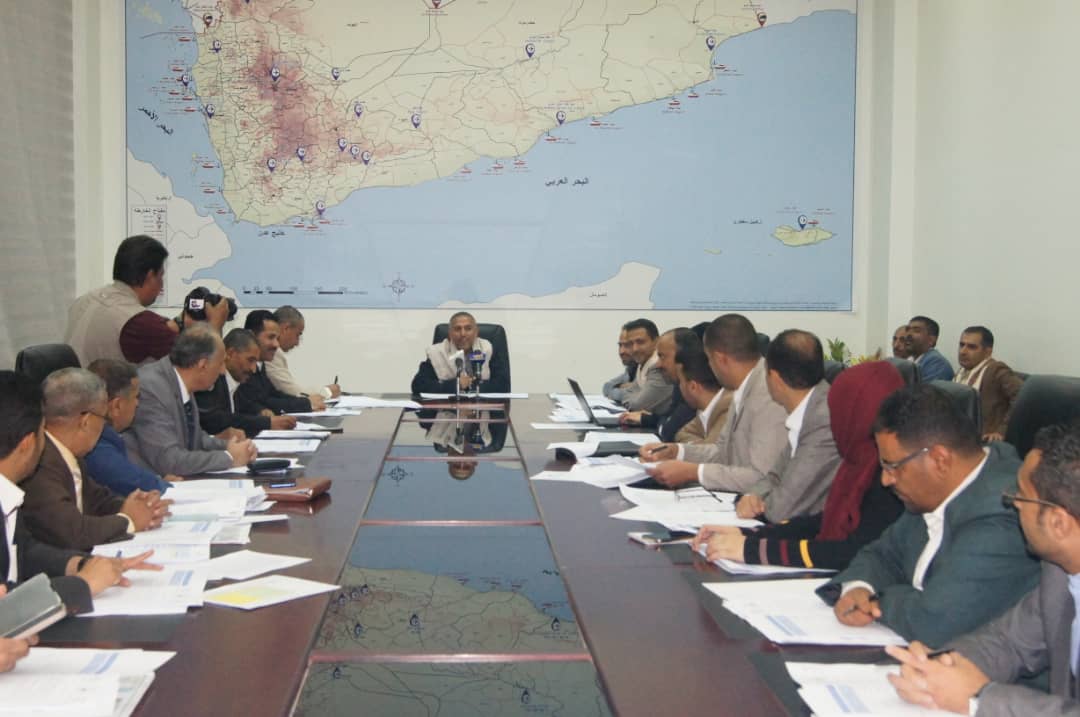 An expanded meeting was convened on 20th October 2021, chaired by the Minister of Transport- Amer Al-Marani, discussed the level of achievement of the ministry’s plan and its affiliated authorities and corporations, for the second phase of the National Vision 2021. The meeting, which included the team for the service ministries sector at the Presidency of the Republic headed by Sami Jahaf, the Chairman of the General Authority for Land Transport Affairs- Walid Al-Wadai’i, the Head of the Executive Unit at the Ministry of Transport- Eng. Nazir Al-Duba'ai, and the Director of Sanaa Airport- Khaled Al-Shayef reviewed the projects, programs and activities that have been executed and the projects under execution which were included in the ministry’s second phase plan     .

The meeting also addressed the priority projects that would develop the transport sector, including the Sana’a Airport runway maintenance project, the Hodeidah seaport docks project, and the strategic projects in the different transport fields that require concerted efforts to provide the necessary funds for them.

Meanwhile the Minister of Transport stressed the need to develop a mechanism for financing transport sector projects, especially in light of the continued aggression and blockade. He also indicated that the ministry and its affiliated authorities and corporations executed a number of projects included in the national vision, and there are projects that were not implemented due to the lack of funds.

He pointed out to the importance of developing the appropriate solutions in the light of analyzing the current situation to produce positive results. The Minister- Al-Marani explained that there are projects with the ministry and its affiliated authorities and corporations, including a long-term strategy that needs studies, planning and economic feasibility studies, in addition to immediate projects of importance that require execution.

In turn, the head of the special team for the service ministries gave a detailed explanation about the observations related to the level of execution of the Ministry of Transport's plan for the year 2021, which contributes to addressing the difficulties encountered in executing the plan, as well as the transfer of important projects that were not implemented to the later phases of the national vision.

In the meantime, the Head of the Main Executive Unit for the transport sector reviewed the difficulties facing the unit and the appropriate solutions to execute the projects included in the national vision in accordance with the directives, instructions and analysis of the current situation..noting that the unit submits its reports on a regular basis to the executive office of the national vision management regarding projects, programs and activities of the Ministry of Transport and its affiliated authorities and corporation.

In turn, the Heads of the sub-units of the authorities of land transport, civil aviation and maritime affairs touched on the projects, activities and programs that have been executed and which are under execution, and the lagging projects due to the lack of funding.

The meeting was attended by the members of the main executive unit of the transport sector and the sub-units of the land transport, civil aviation & meteorology and maritime affairs authorities.