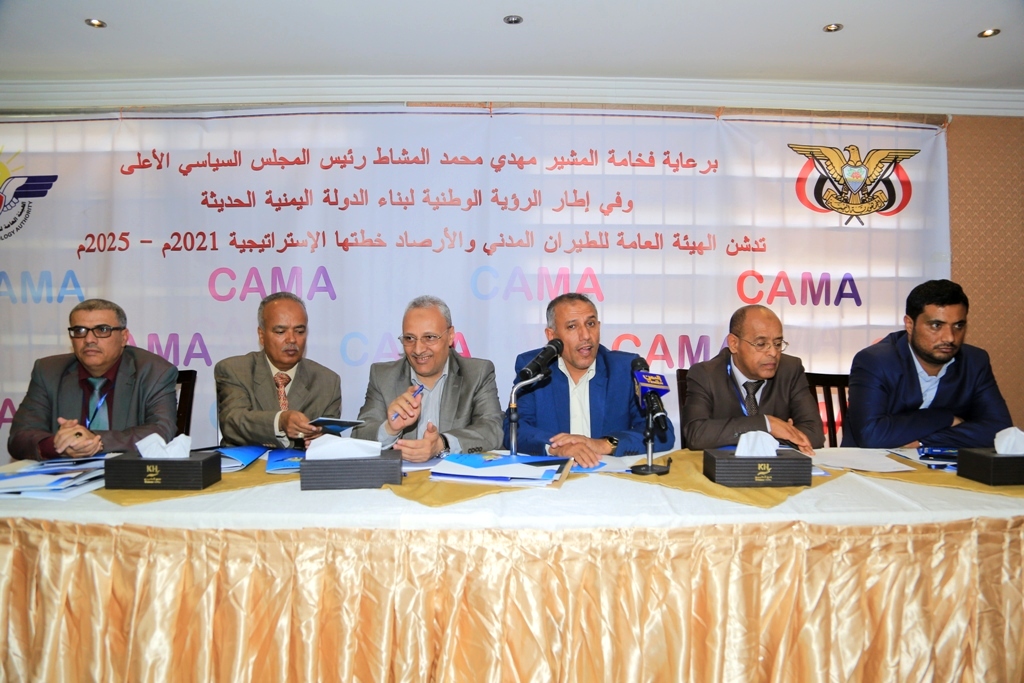 The Deputy Prime Minister for National Vision Affairs, Head of the Executive Office for the National Vision's Management, Mahmoud Al-Junaid, accompanied with the Minister of Transport- Amer Al-Marani, Chairman of CAMA- Dr. Mohammed Abdulkader, and CAMA's Deputy Chairman- Raed Jabal, inaugurated on 11th October 2021 the work of the CAMA Strategic Plan 2021-2025 within the framework of the national vision. The plan aims to promote and develop the civil aviation fields at the local and international levels within the framework of the national vision and the International Civil Aviation Organization (ICAO) strategy, most notably the aviation safety in the Republic of Yemen FIR and its oversight in order to achieve the standards of  ICAO and to promote and develop the air navigation and weather meteorology fields, airports' development and air transport's promotion.

During the inauguration, the Deputy Prime Minister for National Vision Affairs stressed on the importance of developing the strategic plans for any institution, as they are the true approach and the right path to achieve the best results on the ground. He said: "no institution can improve its performance and achieve its goals unless it has a strategic plan in accordance with the elements related to human and material resources, regulations, laws and systems."

Al-Junaid considered the strategic plan of CAMA as a model for many Institutions of the State, noting that the plan was consistent with the national vision as it includes a set of national goals. Meanwhile the Deputy Prime Minister for National Vision Affairs revealed the launch of the State's National Strategy in the coming days.

He also praised the strategic plan that was prepared by the specialists in CAMA and its different sectors, as it is a systematic plan that took into account the requirements of the national vision phases and the analysis of the current situation, in addition to the requirements and conditions of the international organizations and ICAO. In turn, the Minister of Transport pointed to the importance of CAMA's plan and the basic objectives on which it was built, as it is concerned with addressing all the aspects related to aviation safety and security, airport operation, air navigation and meteorology services.

He urged the leadership and cadres of CAMA to redouble the efforts to promote and develop the civil aviation fields and execute the strategic plan. In addition, he explained that the Ministry of Transport and its affiliated authorities and corporations are currently working on developing a strategic plan that contributes to promoting and developing the fields of land, sea and air transport in accordance with the directives of the national vision and the results of the current situation analysis. Whereas the Chairman of CAMA indicated that the strategic plan of the authority was issued after several phases, starting with analyzing the current situation and formulating the strategy and reference, then accreditation and issuance as being the main directives for the strategic work of all components of CAMA.

In turn, the Director General of Planning and Quality at CAMA- Hashem Abdulkader, gave a detailed explanation of the plan that included the content and components, an analysis of the civil aviation sector and meteorology reality, the phases of the plan, and the main objectives of the plan that will be executed in accordance with two local and international tracks. The Director of the Strategic Planning at CAMA- Mohammed Al-Nehmi also gave a presentation on CAMA's work plan analysis for the year 2021, its achievements during the first half, and the difficulties facing its sectors.

The inauguration, which was attended by the Deputy Minister of the Ministry of Transport for Air Transport Sector- Abdullah Al-Ansi, and the Assistant Deputies Chairman of CAMA, Directors Generals of CAMA and its sectors, included a presentation on the Strategic Framework of The Plan.