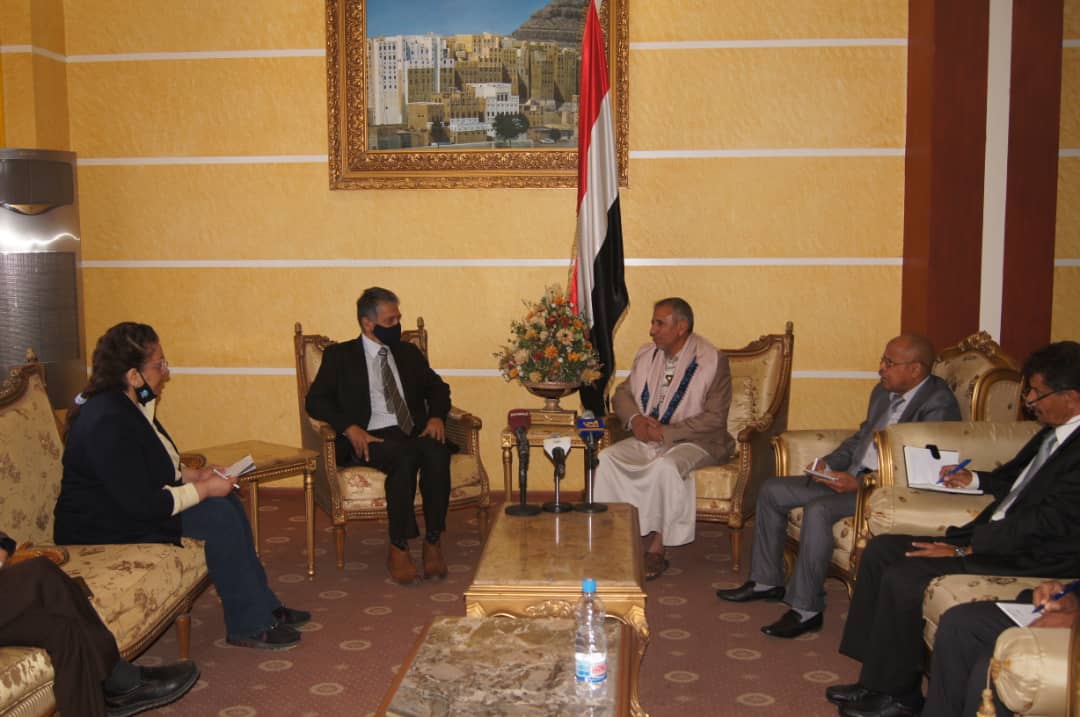 The Minister of Transport- Amer Al-Marani met on 26th September 2021 the Head of the United Nations Mission to Support the Hudaydah Agreement- Head of the Deployment Recoordination Committee, General/Abhijit Guha. The meeting, which was attended by Deputy Foreign Minister- Hussein Al-Ezzi, Chairman of CAMA-. Dr. Mohammad Abdulkader and Head of the Technical Office at the Ministry of Transport- Abdul Karim Saleh, reviewed the aspects related to the implementation of the Stockholm Agreement and the facilitations provided by the Government of National Salvation, for the mission to carry out its tasks, in return for the other party's repudiation and evasion of implementing their obligations.
The meeting touched on the humanitarian situation in Yemen and the suffering of the Yemeni people as a result of the continuation of the aggression, the siege, the closure of Sana’a International Airport, and the prevention of the entry of ships of oil derivatives, food and medicine to the port of Hodeidah. He also touched on aspects related to the rehabilitation of Hodeidah seaport in accordance with the Stockholm Agreement, and the port's necessary needs of cranes, bridge cranes, equipment and devices.
In the meeting, the Minister of Transport also affirmed the ministry's keenness to provide all facilitations to the United Nations Mission in Hodeidah and to facilitate its tasks to implement what was stated in the Stockholm Agreement. He denounced the deliberate and insistence of the countries of aggression to close Sanaa airport to commercial and civil flights and to obstruct the entry of ships loaded with oil derivatives, domestic gas and commercial goods to the port of Hodeidah.
The Minister of Transport also stressed the need to open Sanaa airport to all civil flights to alleviate the suffering of citizens and the killing, looting and kidnapping they are exposed to while traveling through Aden and Seiyun airports. He pointed out that the crime of Abdul Malik Al-Sanbani revealed to the public's opinion and the international community the extent of the suffering that the citizen is exposed to during his travels in the occupied governorates.
For his part, the Head of the United Nations Mission to Support the Hudaydah Agreement praised the cooperation of the Salvation Government and the facilities it provides to the mission, stressing that alleviating the suffering of the Yemeni people is a priority of the United Nations.