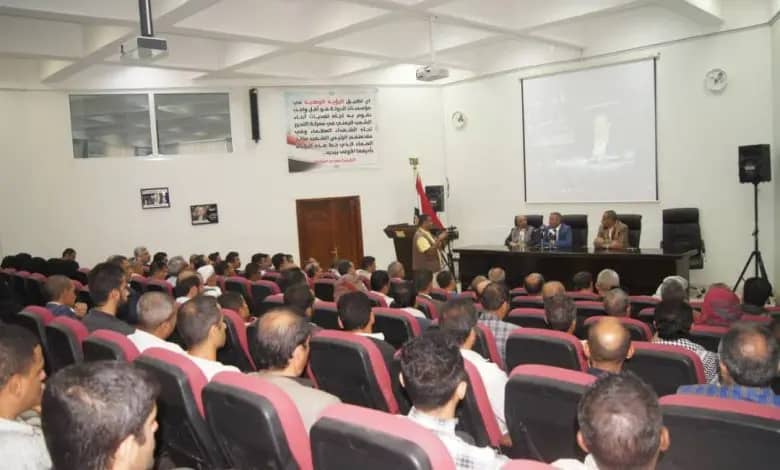 The Minister of Transport- Amer Al-Marani affirmed that the Ministry and its Sectors, authorities and corporations are keen to develop the work and provide its services to the citizens in a manner that ensures the optimal execution of the development programs and plans in the different transportation fields.

The Minister- Al-Marani praised the high level of the job discipline during his meeting on 20th May 2021 with the Ministry's cadres after Eid Al-Fitr holiday, pointing out to the ministry’s role in executing the projects, programs and plans of the National Vision of Building the New Yemeni State aiming to move the wheel of the national economy.

He also referred to the Ministry's plans for automation and networking with all its authorities and corporations, in order to facilitate its services, improve the transportation fields, and benefit from technological development. He stressed the importance of evaluating the work and performance to improve the technical and professional services in the areas of Land, Sea And Air Transport, which the aggression sought to paralyze its movement.

Moreover, he pointed out to the need to train and qualify the Ministry’s cadres and its affiliated authorities and corporations, to develop the performance and capacities' building in accordance with the National Vision Methodology.

In the meantime, the Minister- Al Marani affirmed that the Ministry of Transport is keen to contribute to the construction and development through the plans and projects that were included in the National Vision Matrix different phases.

The meeting, which was attended by the Ministry's Deputies, Advisors, the Chairman of the General Authority for Regulating Land Transport Affairs- Walid Al-Wadea'i, and the ministry’s employees, discussed the ministry’s development plans during the coming period and the difficulties facing the different Transport Sectors and means of tackling them.