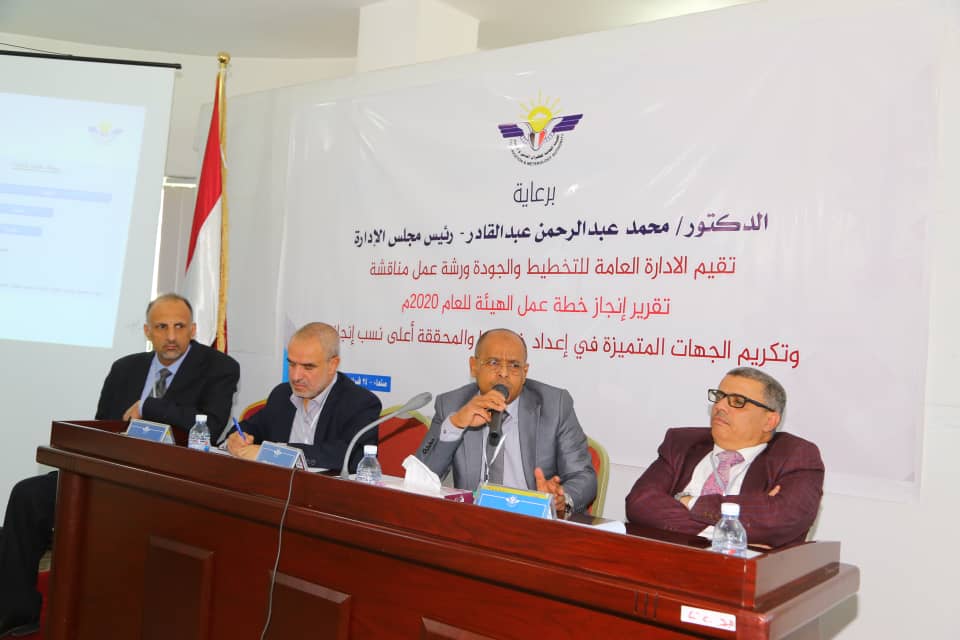 CAMA convened the second workshop on the achievement of its work plan for year 2020 that was organized by the Directorate General of Planning and Quality Audit. The workshop aimed to establish solutions to the problems that are facing the sectors of CAMA and taking the necessary measures that will contribute in developing and modernizing the performance.
The workshop also discussed the work plans of the Sectors and Directorates General of CAMA, problems and obstacles facing them, also reviewing the achievements that had been accomplished during the last year under the conditions of the aggression and blockade imposed on Yemen which hindered the plans of updating because the work of CAMA is professional and technical that is associated with international conditions and requirements established by ICAO in particular. In the workshop, Dr. Mohammed Abdulkader- Chairman of CAMA referred to the importance of the workshop in developing and updating the works of CAMA and its sectors by specifying the obstacles and problems and establishing the proper solutions to them.
He also stressed on CAMA’s attention paid to the training and qualifying its cadres technically and professionally in order to serve its work in the local and international level. Abdulkader also clarified that the aggression destroyed the technical systems and equipment, VHF systems and radars of the airports, pointing out that we at CAMA solved a lot of problems and difficulties by finding alternatives and have been able to achieve the accomplishments of which restoring the operational readiness of Sana’a airport despite the the aggression and blockade.
Meanwhile, the Director General of Planning and Quality- Mr. Hashim Abdulkader presented the achievements attained by CAMA during the last year in the sectors of safety, air navigation, meteorology, airports and the other directorates general, percentage of achievement, problems and obstacles. In the end of the workshop that was attended by the representative of the Ministry of Finance- Mr. Anaam Al-Shahari, Asst. Deputies Chairman of CAMA, directors general of CAMA, the distinguished sectors and directorates which attained the highest percentage of performance were honored.