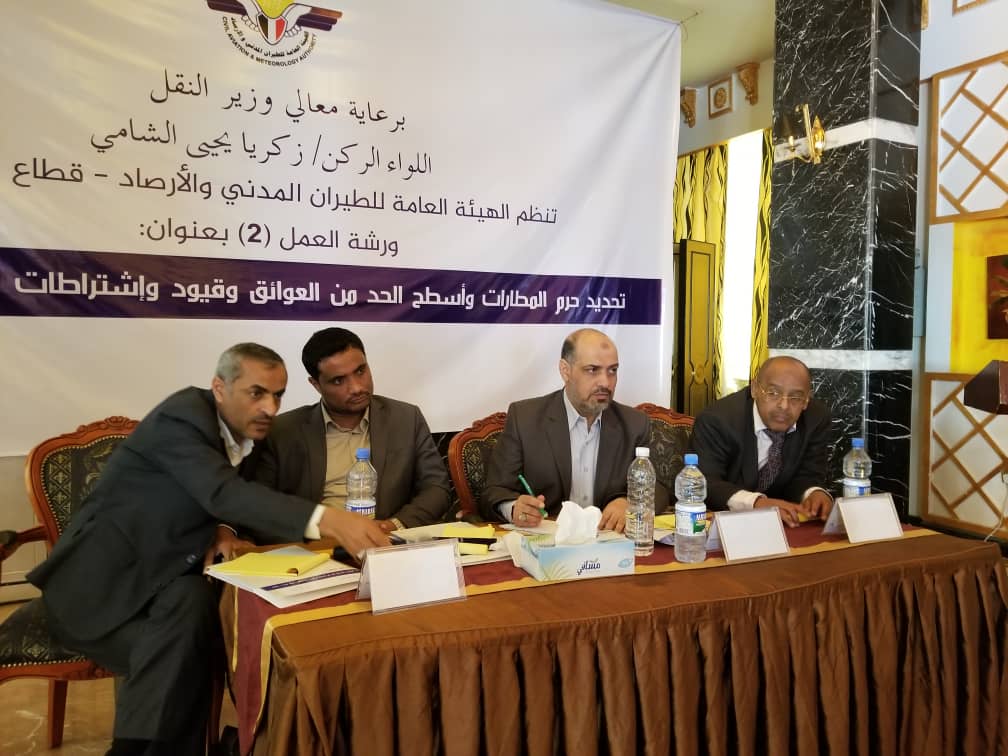 The second workshop was concluded on 31st January 2021 in Sana'a with the identification of the airports' campus, obstacles reduction surfaces, building restrictions and requirements, organized by CAMA – Airports' Sector. The aim of the workshop was to review what had been done with regard to the airports' future plans in implementation of the recommendations of the first workshop and to finalize the proposals for the necessary amendments to determine the airports' campus and the future requirements in accordance with the International Law and Regulations. Over the course of two days, the workshop, with the participation of (56) professionals, technicians and engineers of CAMA, its various sectors and related authorities, reviewed the illegal buildings at the airports' campus, including Sana'a International Airport and Taiz International Airport, and the repeated attacks on the airports' campus.
At the conclusion of the workshop, the Minister of Transport- Mr. Zakaria Al-Shami stressed the need to preserve the lands of the airports from aggressions. He also called for the cooperation of the relevant authorities and for working in a team spirit to preserve the airports' lands. He pointed to the need for awareness workshops for the employees and concerned authorities. The Minister of Transport urged the participants to execute the recommendations of the second workshop, which would serve the work in the areas of civil aviation, particularly as the aggression sought to cripple this vital sector for all Yemeni people.
For his part, the Chairman of CAMA- Dr. Mohammed  Abdulkader, paid tribute to the interaction of the participants in the workshop and the axes involved in the development and strengthening of civil aviation services and its various fields. He also stressed the importance of applying the workshop's outputs in practice, in cooperation with the relevant authorities, so as to contribute to the preservation of lives, public and private properties. In turn, the Deputy Chairman- Mr. Raed Jabal affirmed that the workshop had worked to identify the local and international references against which the standards and dimensions of the airports' campuses and obstacles reduction surfaces had been defined, in addition to specifying the stipulations for building's  restrictions in or around them as well as approving these references and disseminating them to all the airports.
In the closing day that was attended by the Asst. Deputy Chairman for Aviation Safety Sector- Dr. Abdulhamid Abu Taleb, Air Navigation Sector Asst. Deputy Chairman-  Mr. Abdullah Al-Mutawakkil, Sana'a International Airport Director General- Mr. Khalid Al-Shayf, Taiz International Airport Director General- Mr. Nabil Shamsan, Directors General of CAMA, the Asst. Deputy Chairman of Airports' Sector- Mr. Yahya Al-Kohlani praised the attention of the Ministry of Transport's and CAMA's leadership in the airports' sector and for supporting the efforts to preserve the airports' campus. He also drew attention to the airports' sector efforts to develop and modernize the civil aviation areas including the modernization and development of Sana'a International Airport as the first gateway to Yemen.
In the meantime, Six working papers were presented at the workshop, including the problems and perceptions of Sana'a, Taiz and Hodeida airports and work to preserve the airport's campus of aggression. The workshop also came out with recommendations, which were read by the Director-General of the Airports' Sector- Mr. Ameen Jumaan; most notably of which submitting the Airports Campus Amendment charts were submitted to the Prime Minister for the issuance of decisions, the preparation of a matrix of operational procedures and the submission of them to the Supreme Political Council for the issuance of binding orders to the authorities which its work is concerned with the airports, and the preparation of the axes of the third workshop for the execution of the new procedures and plans that shall be applied on ground.