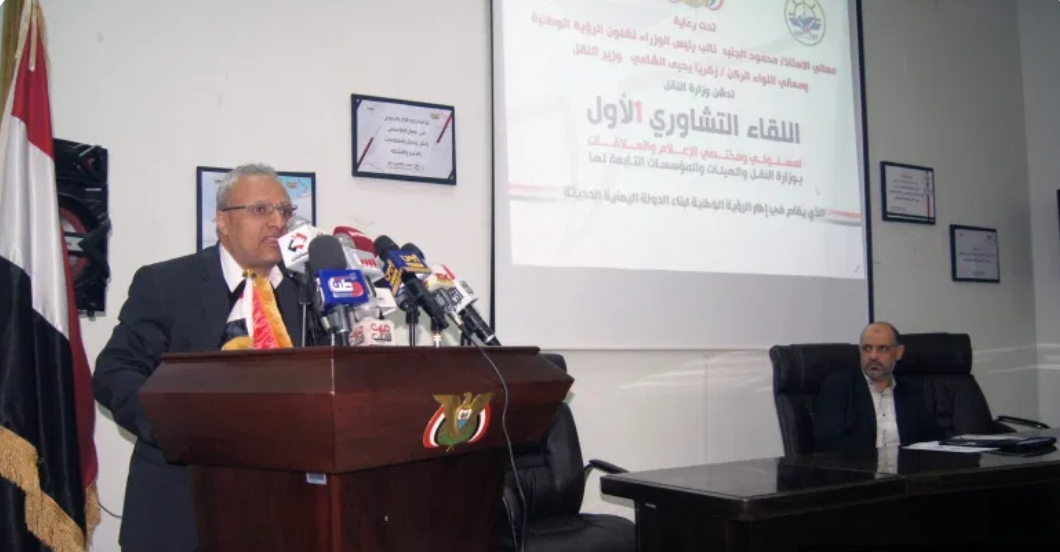 The Ministry of Transport and its affiliated authorities and corporations convened on 30th January 2021 the First Consultation Meeting for the Media and Public Relations Officials under the slogan:  Towards a Unified Media Speech within the framework of the National Vision For Building the New Yemeni State. During the meeting, the Vice Prime Minister for the National Vision Affairs- Mr. Mahmoud Al-Junaid stressed the keenness of developing the human capabilities especially in the areas of media, reports, publications and community awareness. He also referred to the importance of media in revealing the crimes committed by the aggression coalition and their mercenaries since six years. He said: Yemen is exposed to an aggression and blockade by the aggression coalition targeting all the lifes potentials and the Ministry of Transport is concerned to clarify the facts to the local and international community about the effects and repercussions of the aggression and blockade since six years.
Al-Junaid addressed what the Yemeni people are facing of killing, destruction and detaining the Fuel ships in the sea for several months, such an issue must be revealed to the media for the local and international opinion. In turn, the Minister of Transport pointed out that the Ministry and its affiliated sectors, authorities and corporations focused in its plan for the year 2021 on the aspects of professional and technical training and qualification including the media training due to its importance and role in revealing what the marine, land and air transport sectors are facing by being targeted by the aggression coalition and their mercenaries.
He said: based on the National Vision, the Ministry will work during the current year on increasing the training courses to elevate the capacities of the transports sectors cadres technically and professionally; drawing the attention to the role of media in transferring the facts to the public opinion with sincerity and revealing the crimes of the aggression against the Yemeni people. He also clarified that the first meeting of the media officials will come out with visions which will unify the media speech and establishing a strategy that will enhance and develop the areas of transport. He added: the Ministry of Transport and its affiliated authorities and corporations
The Head of Radio and Television Department in the Faculty of Information of Sana'a University- Dr. Mohammed Al-Faqih, stressed the important role of information and its significant impact on the different trends and paths. He also drew attention to the importance of meeting with the information and relations officials of the Ministry of Transport and its authorities to discuss the media and information plans of the Ministry and its sectors to strengthen the active partnership between the Ministry and the media, particularly with regard to air, land and maritime transport.
During the meeting that was attended by the Deputies of the Ministry of Transport, Chairman of Road Transport Regulatory Authority- Mr. Walid Al-Wadid, Director of the Local Road Transport Corporation- Mr. Mohammed Al-Assri and Director of the Civil Aviation and Meteorology Institute- Dr. Naji Al-Sohmi, a brief presentation about the information work, its role and importance to the Ministry of Transport and its affiliated authorities and corporations.
The purpose of the meeting, with the participation of 35 members of the Ministry of Transport and its authorities and corporations, is to improve and develop information work in the various areas of transport in a modern manner and to conduct training courses in the drafting of news and reports, the production and editing of publications, press and information arts.