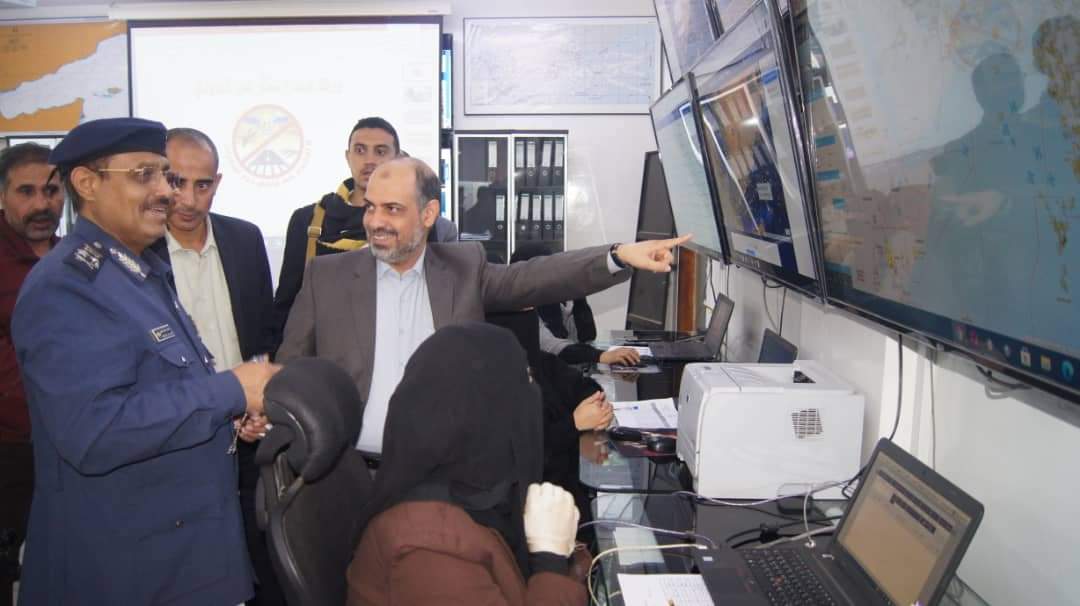 The member of the Supreme Political Council- Sultan Al-Samei checked the work progress in the Ministry of Transport and its Land, Sea and Air Sectors, the level

of achievement and the development plan in accordance with the second phase of the National Vision 2021-2025 and the analysis of the current situation. Al-Samei, together with Minister of Transport- Zakaria Al-Shami, Chairman of the General Authority for Land Transport Regulation- Walid Al-Wadie and Director General of Sana'a International Airport, Khalid Al-Shayef, inspected the Land, Maritime and Air Information Centre and its accurate data and information on maritime, air and land traffic, weather forecast and other relevant information in various transport areas.

Al-Samai also listened from the Minister of Transport to the developments in the Ministry and its sectors and the use of modern technology in the Information Centre regarding Ships' movement and Air traffic over the Yemeni airspace and the land trips through the mass transport companies to the various Governorates. The Supreme Politician council Member- Al-Samai highly praised the efforts of the Ministry of Transport's leadership and its Sectors in modernizing and developing the work of the various transport sectors.

He said: "Six years of aggression on the transport sector have completely destroyed airports, roads and means of transport which caused significant losses", stressing on the interest of the Political Council and the Salvation Government in the transport sector, on which they account for supporting the national economy. The Minister of Transport stressed that the economy of the major powers is based on the ports and airports and generated billions of dollars in revenue reviewing the difficulties encountered in the development of transport areas, most notably the repeated attacks on the lands and parameter of the new Sana'a International Airport Project, Taiz International Airport and the seaports of the Yemeni Sea Ports Corporation.

In the meantime, he also noted that the attacks on airports and seaports would ultimately result in a lack of functioning and hinder the provision, development and expansion of services. He said: "Yemen is characterized by an important land and geographical location. We hope that the relevant authorities will join forces to exploit its wealth by modernizing the performance of its airports and seaports which the Aggression Coalition have sought to destroy". The Minister- Al-Shami pointed out that the development plans and strategic projects that were developed in the areas of transport for the year 2021 were aimed at promoting transport sectors, which would alleviate the suffering of the citizens as a result of the aggression and blockade imposed by the Coalition of Aggression since six years ago.

He said: "Transport projects are important to the nation and the citizen, including dry ports in Sana'a and surrounding the Secretariat of the Capital, for which the engineering studies and designs have been prepared as a qualitative shift in transport regulation and other projects in transport in the Air and Sea Transport under Phase II of the National Vision for the State's building 2021-2025".