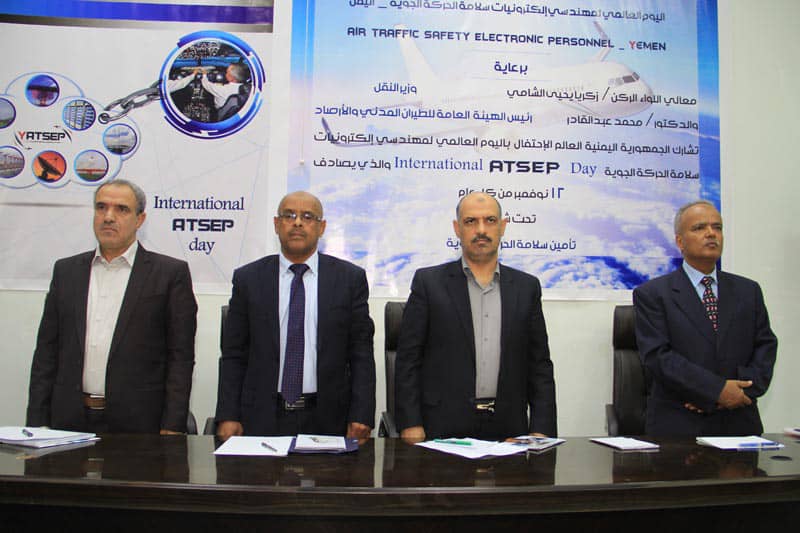 A ceremony was held on 12th November 2019 in Sana'a on the occasion of the International Day of Air Traffic Safety Electronics Engineers (ATSEP DAY), which coincides on the 12th of November each year. At the ceremony, H.E. Minister of Transport- Brigade/ Zakaria Al-Shami praised the achievements of Air Traffic Safety Electronics Engineers in restoring and repairing the infrastructure of the electronic and engineering

networks after being destroyed by the aggression to cripple the civil aviation in Yemen. He considered the celebration of this occasion as an opportunity to introduce services provided by the technical and engineering cadres to preserve the lives of passengers by inspecting the electronics of the aircraft before taking off and to communicate with the crew to facilitate the flight safely and securely over the Republic of Yemen airspace and FIR.Al-Shami referred to the tasks and work of the air traffic safety engineers which is the backbone of civil aviation. He stressed on the keenness and interest of the air traffic safety engineers for their efforts to rehabilitate and repair what was destroyed by the aggression in the field of air navigation electronic engineering and systems. For his part, the Chairman of CAMA- Dr. Mohammed Abdulkader indicated that the importance of celebrating this occasion as the civil aviation is classified as one of the safest means of transport. He also praised the achievements of air traffic safety electronics engineers in securing the air traffic and repairing the electronic network that was destroyed by the aggression.Dr. Abdulkader also said that CAMA has the technical and engineering expertise to enable it to dispense with external expertise, pointing out that the Yemeni expertise is recognized by the International Civil Aviation Organization (ICAO). Meanwhile, the Assistant Deputy Chairman of Air Navigation Sector- Mr. Abdullah Al-Mutawakil indicated that the International Civil Aviation Organization (ICAO) has developed a strategic plan that expires by 2030, which includes a series of improvements at various levels to improve the safety and quality in this sector. The plan included the integration of the air navigation systems into a single framework by building an aeronautical communications network, which was a transition from traditional systems to digital systems.In the meantime, two speeches were delivered on behalf of the Air Traffic Safety Electronics Engineers by Mr. Walid Al-Ansi and on behalf of CAMA's Engineers Syndicate by Mr. Walid Al-Kumaim. They referred to efforts of the Engineers in repairing and restoring the Electronic Network that was destroyed by the Aggression and the readiness of the engineering team to keep abreast of all new in the field of civil aviation. They also pointed out that the celebration of the International Day of Air Traffic Safety Electronics Engineers came after Yemen represented by CAMA joined the Air Traffic Safety Electronics Engineers International Association last year. During the ceremony, which was attended by the Deputy Minister of Transport for Air Transport Sector- Mr. Abdullah Al-Ansi, Assistant Deputies Chairman and Directors General of CAMA, a presentation for the technical and engineering achievements that were made by the air traffic safety electronics engineers in light of the aggression and blockade. At the end of the ceremony, a number of Air Traffic Safety Electronics Engineers were honored with certificates for their efforts to improve the civil aviation services