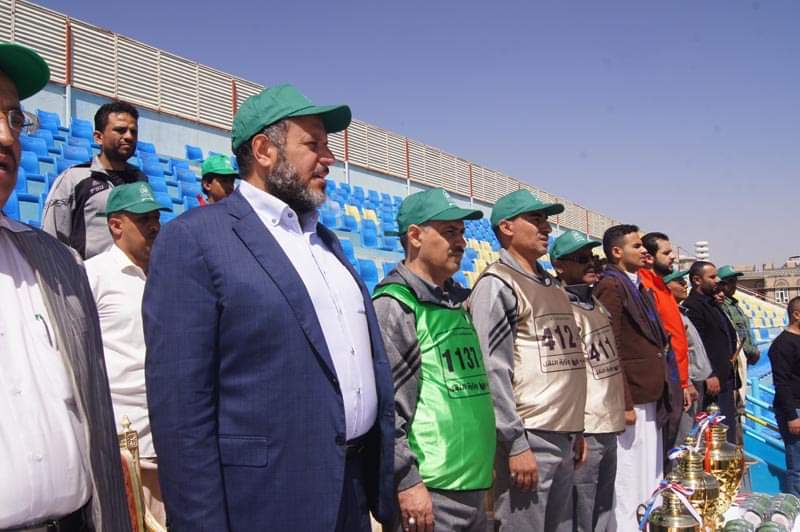 Sana'a Municipality has witnessed on 7th November 2019 a youth and students sports marathon on the occasion of the Prophet's birthday under the slogan "Sana'a kicks off". The marathon, which was attended by H.E. Minister of Youth and Sports- Mr. Hassan Mohammed Zeid, H.E. Minister of Transport- Brigade/ Zakaria Al-Shami, Chairman of CAMA- Dr. Mohammed Abdulkader

, Deputy Chairman of CAMA- Mr. Raed Taleb Jabal, Chairman of Public Authority for Land Transport Affairs- Mr. Walid Al-Wadaei and a number of Directors of the Offices of Education, Youth and Sports Directorates from various schools and clubs in the Directorates of the Capital Municipality.The marathon was launched from the starting point in front of Al-Nahrain Mosque in old Sana'a lake, passing a number of streets of the Capital Municipality to the end point of "Wahdat Sana'a Sports Club" in Hadah, which hosted the honoring ceremony  with a distance of 8 kilometers. The first place for the adult category was for the runner- Emad Al-Khalqi, second rank was scored by Abdullah Al-Aqar, the third was Abdul Rahman Al-Imad, fourth was Abdullah Al-Soraihi, fifth was Hani Al-Shama'a, sixth was Youssef Al-Ezzi, seventh Mohammed Onais, eighth Nasser Haidar, ninth Mohammed Al-Sowari and the tenth Radman Abdul Hakim Radman.From the buds category the first rank was scored by Khalil Rashid Al-Nuzaily, second Ali Hussain Al-Zubaidi, third Akram Shaaban, forth Mohsen Iskandar, fifth Suhail Amin Al-Qohali, sixth Zain Al-Ahmadi, Seventh Issa Al-Maswari, Eighth Abdul Majeed Abdullah Al-Abdali, Ninth Ibrahim Al-Marwani and Tenth Elias Jayash .At the ceremony, Minister of Transport- Zakaria Al-Shami praised the level of organization and the great participation of this sporting event, which comes within the celebration of the Prophet's birthday. Al-Shami also congratulated the winners of the first places and all the winners of the marathon, and invited everyone to attend the grand event next Saturday in Al-Sabeen Square.For his part, the Chairman of the Executive Committee for the celebration of the Prophet's birthday in the capital- Mr. Abdulwahab Sharafaldin, explained that the sports marathon is the culmination of the conclusion of the celebration activities on the occasion of the Anniversary of the Birth of the Prophet, which embodied the extent of love, adherence and close bond with the Messenger of Allah, and the Yemenis loyalty to Him by stay on his covenant and approach. He also stressed that the sports marathon embodied the strong will of the athletes to practice sports activities despite the conditions of aggression and blockade.Sharafuddin praised the efforts exerted by the Education Bureau, represented by the Department of Activities, the Youth and Sports Bureau, and the role of all media channels and their continued interest in making such event a success. At the end of the marathon, Minister of Transport- Zakaria Al Shami and Secretary General of the Local Council, Mr. Amin Jamaan, honored the top ten winners of each category with first place cup, gold medals, money and gifts.The ceremony was attended by Director General of Air Transport at CAMA- Dr. Mazen Ghanem, Director General of Sports Activity at the Ministry of Youth and Sports- Mr. Issam Draiban, Director General of Youth and Sports at the Secretariat- Mr. Abdullah Obaid, Director of Sports Activities at the Education Office at the Secretariat- Mr. Khalid Al-Oqabi and Director General of Follow-up- Mr. Abdulhalim Al-Sukkari