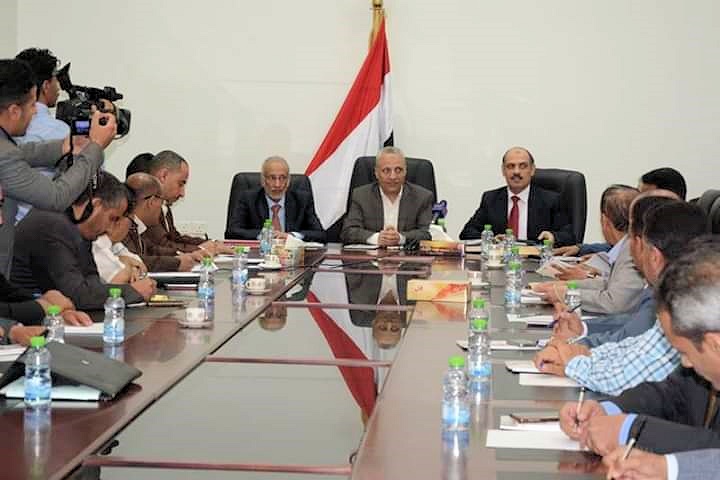 The Deputy Prime Minister for Services- Head of the National Vision Executive Office- Mr. Mahmoud Al-Junaid stressed that the process of building the New Yemeni State needs the contribution of the national capabilities, competencies and expertise. He pointed out during the extended meeting headed by him to the importance of openness to all the components to

contribute to the construction process, in line with the military battle, victories and qualitative development in the missile force and drones aircraft.

The Deputy Prime Minister also indicated in the meeting- attended by the Minister of Transport – Brigade/ Zakaria Al-Shami, Dr. Abdul Aziz Al-Kummim, Minister of Planning, Dr. Ismail Al-Maqari- Minister of Legal Affairs, Mr. Idris Al-Sharjabi- Minister of  Civil Service, Dr. Ali Abu Holeika- Minister of State for the House and Shura Council Affairs, Dr. Hamid Al-Muzajji- Minister of State and Dr. Ahmad Al-Dharafi- Secretary General of the Council of Ministers- that the National Vision came while Yemen is experiencing great difficulties as a result of the continuing aggression against humanity, which is the cornerstone and the basis of development. Meanwhile, he referred to the plans of aggression aimed at destroying the infrastructure and disrupting the work of the State's Institutions and terrorizing the citizens so that they can take control of Yemen and occupying it. "But thanks to the steadfastness and patience of our Yemeni people and the steadfastness of the army and popular committees' heroes, he said.

He added: "we are concerned today as a people and a state to win for this homeland to regain its influence and status in the Arab and Islamic nation." He also said: "the national vision is of great importance in bringing the transformation that the Yemeni people are looking forward to and is currently fighting the battle of destiny, the restoration of identity, the sovereign and political decision, i.e. the battle of restoring Yemen to its strategic and civilization status at the regional and global levels". He also referred to what the Leader of the Revolution had addressed- Mr. Abdulmalik Badr Al-Din Al-Houthi, since year 2016 in his speeches and directives, stressing the need for the concerted efforts, strengthening the institutional work, embracing the competencies in various fields and enabling them to work, stressing that in the same direction came the speech of Martyr President- Saleh al-Samad at the end of the third year of steadfastness, during which he launched the project "one hand protects and the other builds" from which the national vision was launched.

The Deputy Prime Minister pointed out that taking care of human cadres is one of the most important factors that enable the shift to institutional work. He appreciated the efforts of the leadership of the Ministry of Transport, which was able to harmonize between the different sectors of air, sea and land transport and taking care of its employees. He said that the plans prepared by the ministries will be aligned with the strategic plan directives according to the vision and its mechanism of implementation.

For their part, the Ministers of civil service, insurance, legal affairs, planning and international cooperation, and Ministers of State- Abu Holaiqa and the Secretary General of the Council of Ministers stressed that the national vision defines the future of Yemen and the desired Yemeni state, which enjoys the rule of law, the optimal exploitation of resources and investment elements, especially in the field of maritime, air and land transport.
They also pointed out that the strategic plan to be prepared in accordance with the executive mechanism of the national vision should focus on the overall components of the national economy and start the implementation of the possible, including the establishment and the creation of an efficient human component capable of executing the content of the national vision with its different dimensions and objectives.

They stressed on the importance of starting from the legal and institutional building and speeding up the preparation of the general future plans and re-examining the projects that were prepared in the past and evaluating the possibility of resuming their execution under the available means.

In turn, the Minister of Transport stressed that the Ministry, its affiliated authorities and institutions submitted its five-year plan for the development of transport sectors in light of the national vision. He pointed out that the plans and investment programs of the Ministry will be implemented in the future and during the current year, in light of the national vision of building the new state of Yemen. Al-Shami also indicated that the aggression aims at controlling the Yemeni ports which occupy a strategic location on the sea lines connected with the world. He also stressed that the Ministry of Transport seeks to raise its capabilities through strategic and development plans. He added that the transport sector is one of the most important sectors that have great investment opportunities; especially the national vision to build the new Yemeni state emphasizes the construction and development in the economic field, which is the nerve of life.

In the meantime, the Chairmen of Civil Aviation and Meteorological Authority- Dr. Mohammed Abdulkader, Mr. Walid Al-Wada'ai for Land Transport Affairs and Captain/ Mohammad Abu Bakr Ishaq for the Red Sea Ports Authority stressed the importance of the role of transport in accelerating the comprehensive development process. They also pointed out that Yemen has a human wealth that enables it to build a strong national economy capable of competition.

During the extended meeting, discussions were opened on the issues related to the executive mechanism and the importance of working according to the guidelines that will be circulated by the Executive Office of the National Vision and the Ministry of Planning, in preparation of the executive and operational plans for the first phase of the year and half- the stage of recovery and steadfastness.