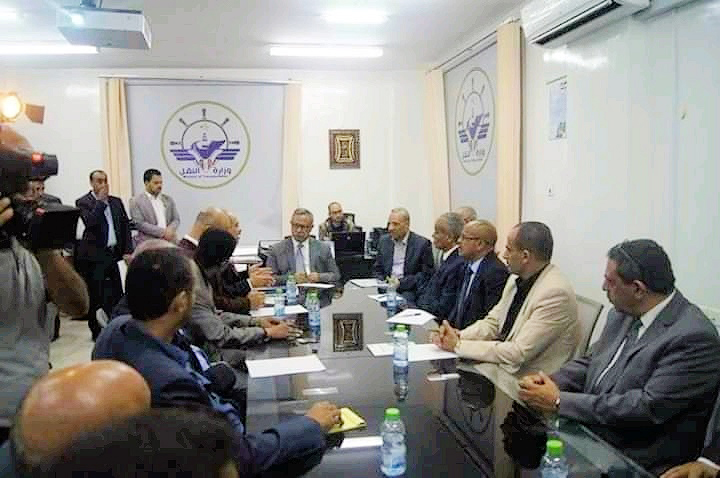 Sharjabi, Secretary General of the Council of Ministers- Dr. Ahmed Al-Dharafi and chairmen of the Institutions of the Ministry of Transport- addressed the level of completion of the tasks assigned to the Ministry, its authorities and institutions and the features of its program that is consistent with the national vision of building the New State of Yemen.

H.E. Minister of Transport- Brigade/ Zakaria Al-Shami reviewed the activities of the Ministry and its remarkable achievements during such extraordinary period, despite the direct challenges imposed by the aggression on the transport sector, including land, marine and air.

In this context, he pointed out that the Ministry has documented all the attacks against the various types of ports by surveying the losses and financial costs at each level of for each sector. He also indicated that the ministry in spite of the aggression and the subsequent destruction of a number of its infrastructures, but it has achieved a significant surplus of activity compared to previous years and nowadays it is working on preparing the Yemeni Airports Guide and publishing a book that deals with the historical development of the transport sector through the ages, recognizing that the future battle is a battle of ports due to the strategic and materialistic importance. The Minister of Transport mentioned that the aggression that is being waged against Yemen today falls within the context of the war of ports, borders and transport routes, which is confirmed by the attempts of the aggression countries to control the cities of Yemeni ports.

He noted the Ministry's gratitude for the great attention given by the Supreme Political Council and the National Salvation Government to the Ministry of Transport and its Institutions and their support for all the efforts exerted by the leadership of the Ministry and the heads of its subsidiary authorities and its development projects aimed at continuous development of all types of transport services.

In the meantime, the Prime Minister stressed on the great importance of the transport sector in the map of the governmental services and its role in the interrelationships and interests between Yemen and the world. He referred to the various efforts and tasks that are accomplished by the leadership of the Ministry and its affiliated institutions and their prominent role during the current situation.

He stressed on the need to neutralize the country's capabilities from the war imposed on the Yemeni people, considering that all the existing infrastructure elements in this sector and in other sectors are for Yemen and its people, whether in wartime or peacetime.
Meanwhile, he conveyed the greetings and appreciation of the Political Council and the Government of Rescue to all the employees in the Ministries and belonging authorities for their efforts and dedication in performing the vital duties entrusted to them. Dr. Ben Habtoor urged everyone to strengthen the spirit of responsibility and continue to work with dedication to achieve the popular aspirations of this sector

The meeting included a visual and audio presentation about the current reality of the transport sector, the size and quality of the damages that affected its facilities, infrastructure and the features of the strategic development projects for the post-aggression and siege phase.