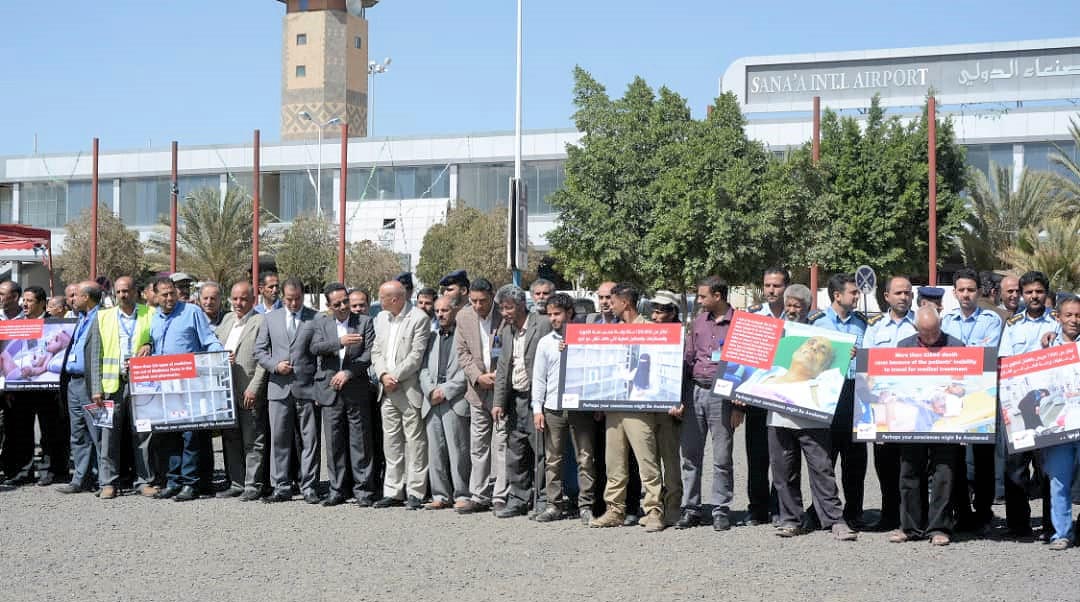 They also denounced the international silence towards the continuation of the aggression coalition to impose blockade on Sana’a International Airport in front of the humanitarian, commercial and civil flights, which doubled the number of deaths of patients who are not able to travel abroad for medication because of the blockade and the closure of the airport.

Meanwhile, Dr. Mazen Ghanem- Director General of Air Transport in CAMA pointed out that targeting Sana'a airport and its continued closure is a flagrant violation of the international Laws, covenants and conventions which criminalize the bombing of civilian airports, calling the civil and international community and the free people of the world to pressurize the aggression coalition to end the blockade on the airport, stressing that the closure of the airport caused a humanitarian disaster.

A statement issued by the protest and read by Mr. Khalid Al-Shayef - Director General of the airport stressed on the continued steadfastness of the Yemeni people in the face of aggression and that the Yemeni people will not be subjected or surrendered no matter how much sacrifice. He also indicated that the protest of the technical, professional, administrative, security and civilian authorities cadres in the airport convey a message to the world of their continued steadfastness in performing the work in the airport in a professional and complete readiness in providing the services in the field of civil aviation.

The statement reassured the readiness of Sana'a International Airport to receive all flights in accordance with international standards and the International Civil Aviation Organization (ICAO), as evidenced by the United Nations aircraft and International Organizations which arrive to the airport on a daily basis.

The statement also falsifies the allegations of the aggression coalition of using the airport for military purposes stressing that there are no military manifestations at the airport and does not form any threat to any neighboring country.

The statement drew the attention that the airport is a civilian airport providing service to civil aircraft in accordance with international civil standards and requirements, appealing to the UN envoy to Yemen, Mr. Martin Griffith not to tie the issue of opening Sana’a International Airport in any future talks because it is a civil airport.

The statement also asked the International Community to rapidly open Sana’a airport in front of flights, including the flights of Yemen Airways, and to pressure the countries of the aggression to end the blockade and open the airport.