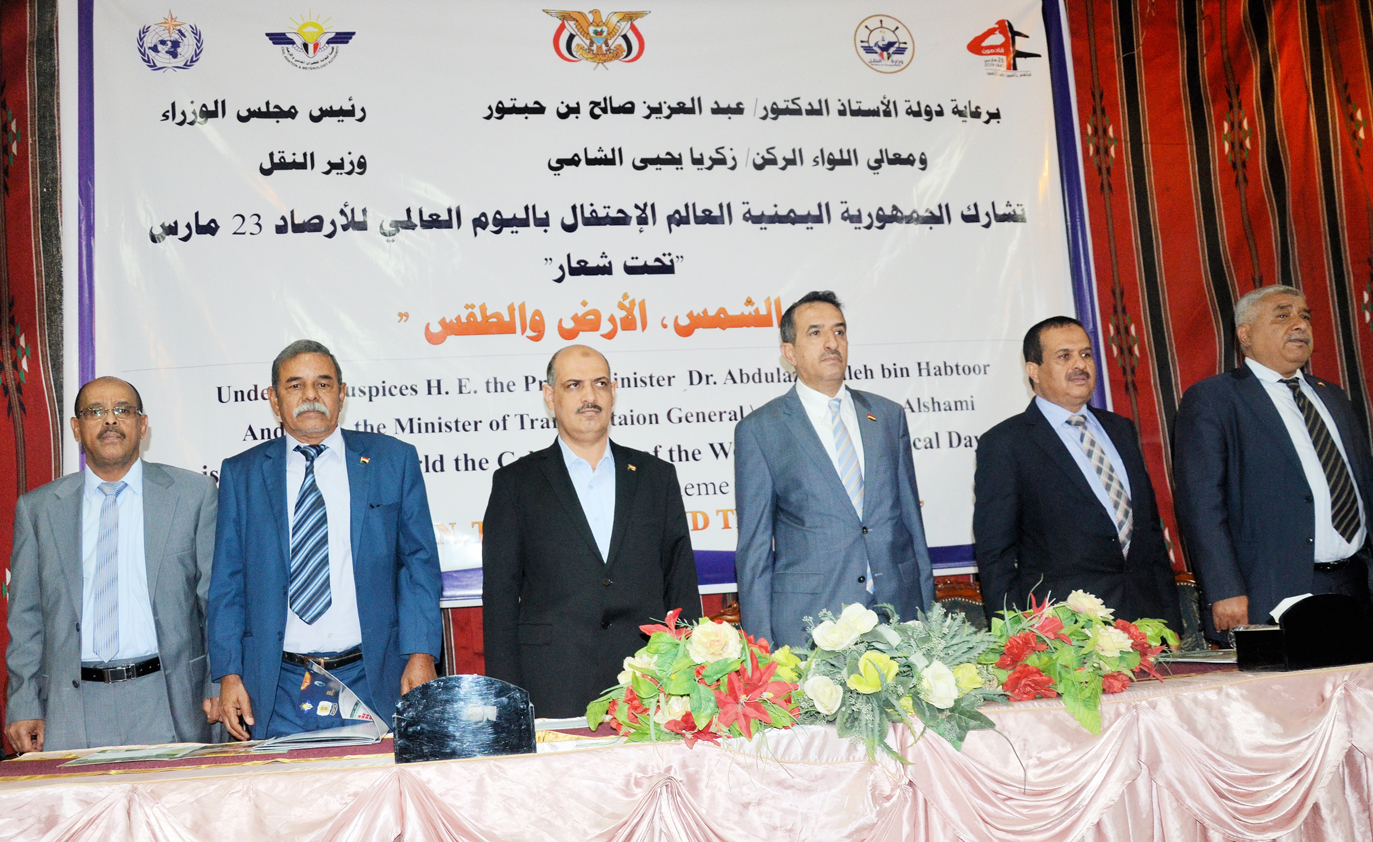 Under the slogan (the Sun, The Earth and The Weather), our country represented by CAMA celebrated the occasion of the World Meteorological Day on 23rd of March. At the ceremony, Deputy Prime Minister for Defense and Security Maj. Gen. Jalal Al-Ruwaishan pointed out that this event coincided with four years of steadfastness in the face of aggression, pointing out that the world is celebrating today under the slogan of sun, earth and weather. Yemen lives under the factors of bombing, siege and war.

He mentioned the importance of the weather and its conditions in the practical and scientific life, pointing out that the weather conditions have become a modern technological study on which countries depend on their strategic plans in building factories and facilities,
"The world is dedicated to discussing climate change, global warming and its destructive impact on humans and animals. The agriculture sectors are exposed to extreme weather events and threaten food security and raise the level of hunger in the world," he said. He called on the international community to condemn the aggression on Yemen, which led to disastrous healthy and environmental risks, recalling upon the United Nations to open Sana'a International Airport to save the lives of patients.

In the celebration which was attended by a number of ministers such as Minister of Industry and Trade – Mr. Abdulwahab Aldora, Mr. Mohammed Almshgri- Minister of Expatriates and Eng. Abdulmalik Al-Thawr- Minister of Agriculture and Irrigation, Brigade/ Zakaria Al-Shami- Minister of Transportation said that our country celebrates this day despite the aggression and blockade to deliver a message of steadfastness and determination to the whole world and the World Meteorology Organization, and to convey the true picture of what is being exposed to our Homeland and its environment of comprehensive destruction and systematic by the aggression. He stressed the keenness of the Ministry of Transportation to provide all facilitations and overcome the difficulties facing CAMA in general and the Meteorology Sector in particular. The Minister pointed out that there is a plan to develop the community awareness of the importance of meteorology and its role in the service of society, clarifying the importance of knowing weather conditions and its changes.

On his part, Dr. Mohammed Abdulkader- Chairman of CAMA said that the celebration of World Meteorology Day is a commemoration of the entry into force of the World Meteorology Organization Convention in 1950, which has become a specialized agency belonging to the United Nations since 1951. He indicated that the revival of this day is an opportunity to highlight the significant contributions that are made by the national meteorology facilities for the safety and well-being of society, noting that this year's slogan focuses on the sun, the earth and the weather. He also mentioned that the Meteorology Sector contributes to the prevention and reduction of potential disasters by providing services to the community through the issuance of warnings and alerting bulletins about the weather conditions, which is an essential component of risk management.

Meanwhile, Eng. Mohammed Hamid- Asst. Deputy Chairman for Meteorology Sector referred to the role of the National Meteorology Center and the services provided to all categories of society by qualified cadres and technical expertise, drawing the attention to the Weather Observation Stations that have been constructed in a number of Governorates.The celebration included a presentation of the World Meteorology Organization (WMO)- Secretary General- Mr. Petri Talas that was delivered on this occasion, in addition to a cultural entertainment show on weather and its importance in the lives of people presented by the ingenious child- Omar Abdulaziz Al-Wazir which was applauded by the attendants.

At the end of the celebration-which was attended by Asst. Deputies Chairman of CAMA and Directors General of Sana'a and Taiz airports- Mr. Khalid Al-Shayef and Mr. Nabil Shamsan,   a number of Weather Meteorology Stations employees working in the Governorates of the Republic were honored.