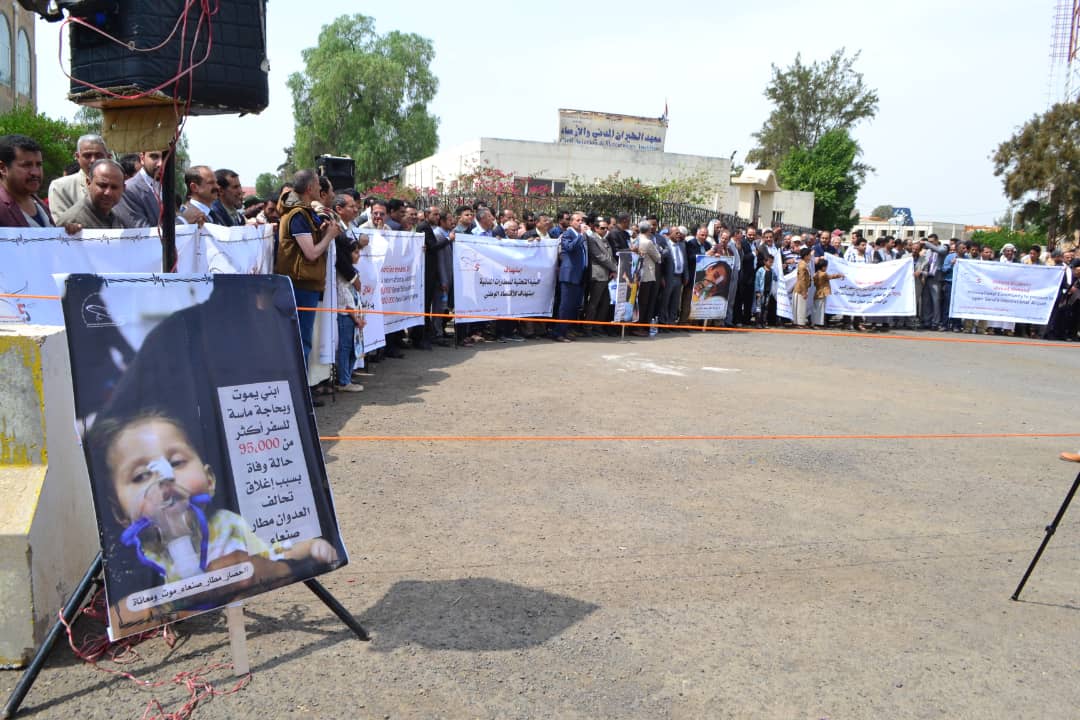 On 10th August 2021, the Ministry of Transport and CAMA organized a protest Sit-In in front of Sana'a International Airport, over the passage of five years of Sana'a International Airport closure by the US-Saudi aggression coalition. The participants in the protest sit-in, in the presence of the Deputy Minister of Transport for Air Transport Sector- Abdullah Al-Ansi, and the Chairman of CAMA- Dr. Mohammed Abdulkader, raised banners condemning the crimes of aggression against the Yemeni people in general, explaining the catastrophic humanitarian repercussions caused by the airport closure. The participants affirmed their steadfastness and resilience in the face of the aggression and the challenges resulting from it. They described the silence of the United Nations and International Organizations regarding the airport's closure as shameful, pointing out that the desecrated Gulf money has violated all the Laws, Regulations and Agreements that guarantee human rights. For his part, the Deputy Chairman of CAMA- Raed Jabal stressed that Sana'a Airport closure for the fifth year has increased the steadfastness and resilience of the workers and technicians in continuing to work and development in the field of civil aviation. He also pointed out that the decision to close the airport was taken unilaterally by the Saudi Arabia to kill the Yemeni people, pointing out that this closure is in contrary to all the International Laws and Agreements, including the Chicago Convention.In turn, the Director General of Sana'a airport- Khaled Al-Shayef explained that the closure of the airport caused a major humanitarian disaster, in accordance with the testimony of the United Nations, which did nothing to lift the ban on the airport, which receives the UN aircraft on a daily basis. Meanwhile, he stressed the airport's technical readiness to receive all the civilian flights, pointing out that Sana'a Airport is the main artery that serves more than 80% of Yemen's population and the first gateway to the Republic of Yemen. In the meantime, a statement was issued by the Protest Sit-In read by CAMA's spokesperson- Director General of Air Transport- Dr. Mazen Ghanem condemning the continued closure of Sana’a International Airport in front of the civilian flights since 9th August 2016. He also stressed that the airport's closure is violating all the International Laws and Treaties, and a flagrant and barefaced violation of the United Nations Charter and International Humanitarian Law, the Universal Declaration of Human Rights and the Two International Covenants on Civil, Political, Economic, Social and Cultural Rights and the protocols attached to them, in addition to being in conflict with the texts of the Chicago Convention 1944 adopted by the International Civil Aviation Organization (ICAO).

Moreover, the statement pointed out that the continued closure of Sana'a Airport in front of the civilian flights for more than five years has exacerbated the humanitarian situation and resulted in the death of thousands of patients with incurable diseases. It  caused incomparable family dispersion, restricted the freedom of millions of Yemenis, impeded the movement of vital medicine and food supplies, and turned Yemen into a large prison. The statement stated that the Ministry of Health's statistics indicate the death of more than 95,000 patients who were in urgent need to travel for treatment abroad, and more than 480,000 patients who urgently need to travel in a way that cannot be postponed, more than 30 cases die daily.According to the statement, the statistics indicate that more than 71 thousand patients with cancerous tumors are at risk of certain death and more than 8 thousand patients with Renal failure who need Renal Transplantation to save their lives, and more than one million patients are threatened with death as a result of the lack of medicines for incurable and chronic diseases, and the lack of solutions and medical supplies that used to be transported through the air. The Statistics also indicate that more than 4 million expatriates have been denied the right to return home to visit their families, not to mention that thousands of students lost their scholarships due to their inability to travel to join their educational institutions abroad due to the continued air blockade imposed on Sana'a airport, as well as the disruption of the interests of many of businessmen.

The statement praised the humanitarian role played by activists abroad and free people in the world to demand the reopening of the airport and the resumption of the civilian flights, praising the role of some international organizations that considered closing the airport an unforgivable crime and described the past five years as a comprehensive mass death penalty for the Yemenis. In the statement, the Ministry of Transport and CAMA renewed their denunciation of the inability of the United Nations and the UN Security Council regarding the persistence of the aggression coalition in closing the airport, calling for a quick decisive stance towards ending the ongoing air blockade on the Yemeni airports.

The statement also called on the issuance of a binding international resolution to immediately and unconditionally lift the blockade imposed on Sana'a airport, as it is a humanitarian demand that is not subject to negotiation or vain procrastination. The statement held the aggression coalition legally responsible for the catastrophic consequences of human, material and moral losses as a result of the continued closure of the airport in front of the civilian flights.

The statement urged the global human conscience and free peoples to pressure their governments and demand them not to support the coalition countries in this brutal aggression and unjust blockade on the Yemeni land and people, and the immediate lifting of the air blockade imposed on Sana'a airport. The Protest Sit-In was attended by the Assistant Deputies of the Ministry of Transport and CAMA.