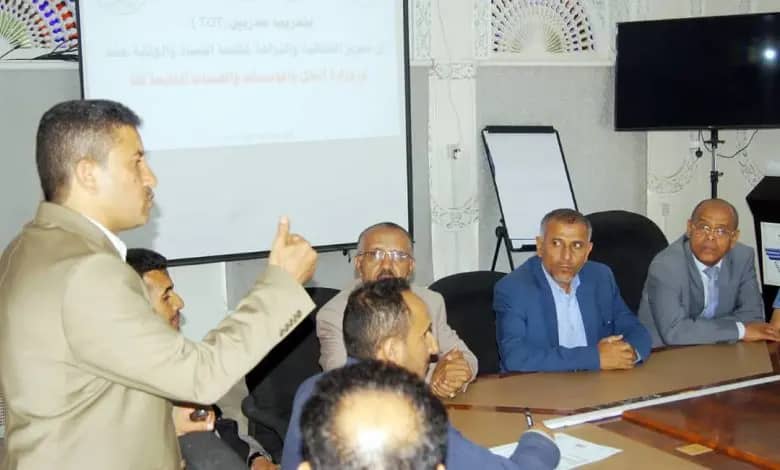 H.E. Minister of Transport- Amer Al-Marani stressed the importance of training and qualifying the ministry's cadres in the technical, financial and administrative fields, due to its essential role in eradicating corruption and enhancing transparency and integrity. In the opening of a training course for the trainers in the field of promoting transparency, integrity and combating corruption (the second batch) on 30th May 2021 at the Civil Aviation and Meteorology Institute, Minister- Al-Marani pointed out to the positive results achieved by the Ministry of Transport and its affiliated authorities and corporations through the joint awareness program with the Supreme National Anti-Corruption Authority, which lasted for three Months.He also indicated that the Ministry of Transport and its affiliated authorities and corporations paid great importance to the training and qualification process in the field of combating corruption, in a way that contributes to the development of various transportation fields.  Meanwhile, the Minister of Transport praised the efforts of the trainers from the Supreme National Anti-Corruption Authority to promote the values ​​and principles of transparency and anti-corruption among its cadres, especially in the financial and administrative fields.The course, which was inaugurated by the Chairman of CAMA- Dr. Mohammed Abdulkader, and the Director General of the Civil Aviation and Meteorology Institute- Dr. Naji Al-Sahmi aims to provide (16) trainees from the ministry and its affiliated authorities and corporations with the basic concepts of the risks of corruption and its negative effects on development. The seven-day course is a continuation of the awareness program to enhance transparency, integrity and combat corruption between the Supreme National Anti-Corruption Authority, the Ministry of Transport and its affiliated authorities and corporations.In the meantime, the Minister of Transport and the Chairman of CAMA were briefed on the progress of the training process at the Institute. The Minister of Transport also listened from the Director General of the Institute to an explanation of the progress of the training process in accordance to the latest educational methods and curricula approved by the International Civil Aviation Organization (ICAO). The Chairman of CAMA and Director of the Institute pointed out that the final version of the initial training curriculum in the field of Aviation Safety was completed by the Training Curriculum Development Committee in the Ministry and the Institute.