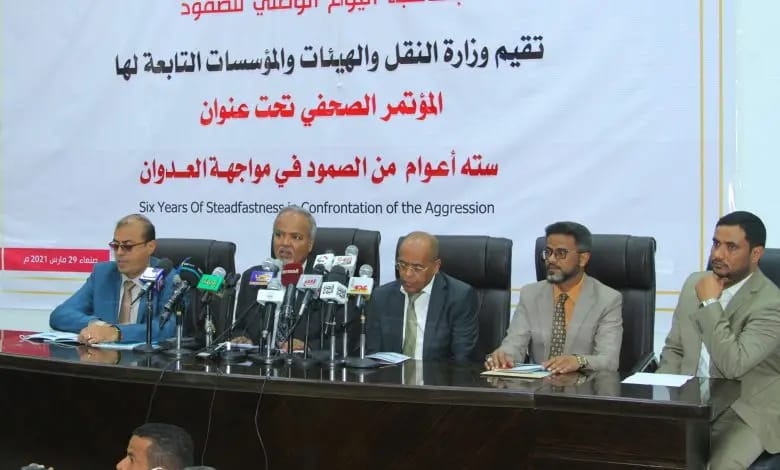 He said: “in coincidence with the sixth anniversary of our Yemeni people resilience in the face of the aggressive aggression that was launched on Yemen targeting the children, women, civilians and civil facilities, of which the different air, land and sea transport sectors. He added that the aggression coalition countries had exercised pressures by committing crimes in the humanitarian and social side, where the number of casualties and victims due to the closure of Sana’a International Airport were estimated by 80,000 death cases because of their inability to travel and more than 450,000 chronic diseases cases who badly need to travel abroad for medical treatment”.

He also stressed that the ministry of transport under the leadership of the transport’s legend and the nation’s deceased- Minster of Transport- Brigade/ Zakaria Al-Shami prepared the plans, programmes and studies to restore the technical readiness to these facilities relying on the human capacities instead of the machine that was destroyed by the aggression on a systematic basis; affirming that the transport’s sector has proved its capability to steadfast in the face the aggression in spite of being exposed to continuous targeting and destruction by the aggression.

In the meantime, he pointed out that the ministry of transport and its various sectors achieved great achievements and successes, a matter of fact that made the aggression to impose the blockade on the Yemeni airspace, civil airports, seaports and land ports in order to paralyze their movement and humanitarian services that were provided to two thirds of the Yemeni people through Hodeidah Seaport over the last six years of aggression, blockade and progressive bombing on the different transport’s sectors. He also stressed that Yemen has come out with victory over the unfair aggression, where it became an industrial country which frightened the aggression and stopped its expansionary greediness because of our great Yemeni people resilience and its internal front solidarity.

In turn, the Chairman of CAMA- Dr. Mohammed Abdulkader clarified that the aggression air fighters since the first day of the aggression on Yemen on 26th March 2015 targeted the infrastructure of the civil aviation and meteorology airports, buildings, facilities, air navigation systems and civilian aircraft which hinders its activity at the Arab and international levels; transgressing all the values, principles and religious and humanitarian rights striking against the wall all the international conventions and treaties that criminalize and forbidden all their aggressive exercises.

Abdulkader pointed out that the aggression destroyed a number of air navigation and radar stations in most of the Republic’s locations and the DME- ILS systems at most the Republic’s airports, in addition to destroying weather meteorology stations which led to the loss of the climate information which the Yemeni citizen needs. He also indicated that the aggression turned a number of the civilian airports to military bases after their occupation; turning them into military bases for their armies and mercenaries from which they launch their aggression on the Yemeni people.

Meanwhile, the Chairman of CAMA affirmed that CAMA have devoted all its financial, humanitarian and technical capabilities and potentials to continue in running and operating civil aviation and meteorology system and preserving its FIR and working under high proficiency and complete neutrality in the different phases.

On the other hand, the Director General of Projects in the Red Seaports Corporations- Sami Maghbouli pointed out that the Saudi- American aggression coalition caused the corporation and its seaports (Hodeidah, Mocha, Al-Saleef and Ras-Issa) great damages and losses clarifying that the aggression fighters targeted Hodeidah seaport in August 2015 targeting the containers’ station that was totally destroyed. He added that the jet fighters launched a number of air raids on Mocha seaport in October 2015 destroying it totally and then was occupied.

He reviewed the direct damages and losses that were caused to the Red Seaports Corporation at an amount of $606,007,000 US dollars including the buildings, facilities, equipment and tools, noting that the direct losses resulting from the non-regular maintenance, various expenditures and loss of revenues since the beginning of the aggression until 2020, in addition to the indirect losses that reached an amount of $598,000,000 US dollars for the projects that the corporation had intended to execute aiming to develop its activity and docks.

On his side, the Manager of Land Transport Affairs Regulatory Authority- Hashim Al-Wadeai declared that the direct and indirect damages and losses that were caused to the authority because of the aggression and blockade until December 2020 reached an amount of $6,000,000 US dollars including targeting the main branch of the authority and totally destroying Al-Tewal International Land Port and Alib Land Port. He also indicated that the indirect losses and damages resulting from the aggression and their mercenaries reached an amount of $55,902,000 US dollars as a result of suspending the collection of the revenue channels in the ports and the domination of the aggression on the two branches of the authority in Aden, Hadramout and the two land ports of Al-Wadiah and Shehin.

Al-Wadeai pointed out that the damages included in addition to complete destroying of Al-Tewal and Alib land ports which led to suspending the collection of the revenues caused a loss for an amount of $88,750,000 US dollars. He added that the losses of revenues due to the suspension of the future projects that were intended to be executed in 2015 reached an amount of $8,875,000 USD.

The losses of the dry ports were $35,500,000 USD, the projects of passengers’ terminals ($4,005,000 USD), in addition to the projects of the Logistical Land Services Centers in the seaports reached an amount of $8,313,000 USD. He also mentioned that the technical, professional and administrative cadres worked under the continuous bombings of the aggression jet fighters to activate and revive the land transport movement; getting it out of the moraine which the aggression tried to paralyze their movement during the last six years.

In the beginning of the conference that was attended by the deputy minister of transport for maritime affairs- Khaled Al-Namir, Acting Chairman of Yemen Airways- Abdulmalik Motahar and the deputy chairman of CAMA- Raed Jabal, all the attendants stood for a minute of mourning and reciting “Al-Fatiha” on the soul of the nation’s deceased, the transport’s legend, defense hero and the aggression’s defeater- the Minister of Transport- Brigade/ Zakaria Al-Shami.